BilAWAl will get nothing from US visit: Shahbaz Gill 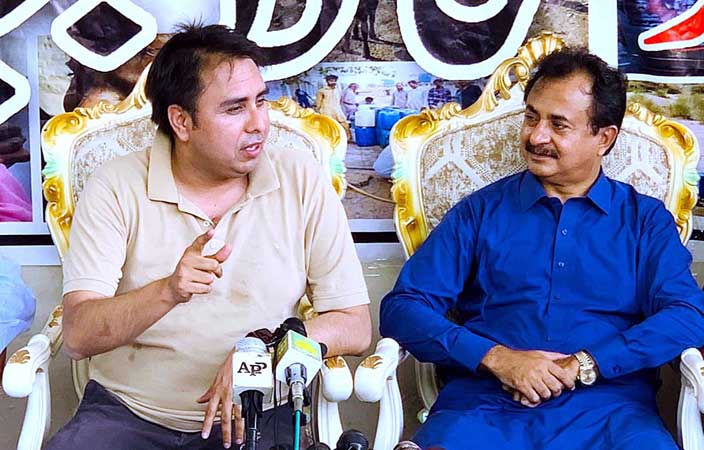 Special Assistant to the Prime Minister on Political Communication, Dr Shahbaz Gill said on Saturday that PPP Chairman Bilawal Bhutto Zardari would get nothing from America during his scheduled visit.

Dr Gill, while addressing a press conference at the residence of PTI leader Haleem Adil Sheikh, asserted that Bilawal Bhutto tried to secure the prime ministerial ‘job’ here in Pakistan and dropped his CVs and other documents everywhere. He got no response since he doesn’t have the capability to do anything.

“Having failed to get a positive response from anywhere, he is likely to embark upon a journey to the US to try and win some people over for the job that he has been aspiring to,” he added. Gill went on to say that the PPP chairman was going to the US with the intention to get some assistance from certain quarters to sell their ‘conscience’ after Prime Minister Imran Khan had flatly refused the American request for access to Pakistan’s air bases. He said that this was against the national interest, while accusing Bilawal of trying to gain perks through tricks. Gill described the PPP chief as having emerged from the ‘fake’ parchi (will) of Ms Benazir Bhutto. He also noted that the federal government had no plans to put his name on the ECL to bar him from leaving the country. “We are ready to put forward his name for the PSL [Pakistan Super League] to play cricket since his young age requires him to play and enjoy life.”

Dr Gill noted that former US secretary of State Condoleezaa Rice had brokered the deal between General (retired) Pervez Musharraf and Ms Benazir Bhutto on October 3, 2007 and that as a result the Americans were given free reign to use the country’s airbases and to attack Afghanistan from Pakistan. “Ms Rice revealed in her book that after contacting both leaders time and again she finally succeeded in getting the deal struck and thus the Americans were given access to the bases,” he said, while asking PPP leaders to read the book.

He also said that US drone attacks took place under both the Musharraf and PPP regimes. The Americans carried out 13 drone attacks during the Musharraf era while 340 drone attacks were conducted under the Zardari presidency. Dr Gill pointedly observed that the US is home to strict defamation laws yet the PPP never challenged Ms Rice’s claims. Similarly, in his book – ‘Capitalism’s Achilles Heel’ – Raymond Baker highlights Benazir and Zardari’s corruption.

Dr Gill said that past corrupt leaders compromised the sovereignty of the country to perpetrate their rule and to stash looted public money in foreign bank accounts. He made it clear that Bilawal Bhutto, unlike his predecessors, would not secure any position through the back door since Pakistan was now being run by a brave and selfless leader like Imran Khan.

He said that as long as Khan was PM – no power could cast its evil eye on the country. While a ‘newborn’ politician like Bilawal would face insults and humiliation for conspiring against the country at such a critical time.

Dr Gill said that the PM had already said that stable Afghanistan would be in the interests of Pakistan and its people.

Dr Gill said that Imran Khan wanted to bring the country on to the path of progress and prosperity and was doing wonders at the international level towards this end. He said that corrupt PPP leaders, after engaging in mass corruption, did not allow the massive corrupt practices did not allow the Leader of Opposition in the Sindh Assembly to comment during the concluding budget session in the provincial assembly. This was because “PPP leaders are scared” of the way in which he exposes them. He said that the Centre had taken strong notice of the illegal actions of the PPP.

He said that the Mr Sheikh had clean hands and was ready to face any inquiry. Dr Gill said that PPP rulers would no longer be given free reign over public funds. Instead, the federal government would take charge of every project and scheme. He also asked Sindh Minister Saeed Ghani to stop issuing baseless statements against NAB.

Dr Gill made it clear that there would be no governor rule in Sindh. Sindh Haleem Adil Sheikh and other PTI leaders were also present during the news conference.