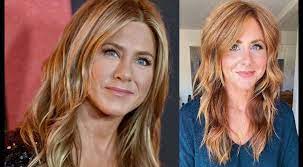 Fans of the comedy series Friends were forced to do double takes after a TikTok video of Tranel lip-syncing to a Rachel Green line from the film went viral. Tranel can be seen mouthing along to a line from the 1997 episode The One Where Chandler Can’t Remember Which Sister in the episode.

The dialogue goes; “I want to quit. But then I think I should stick it out. Then, I think why would such a person stay in such a demeaning job just because it’s remotely related to the field they are interested in.”

Tranel pulls off the act to a T, from her facial expressions to her blonde locks styled exactly like Aniston’s iconic “Rachel cut” from the show, and fans can’t help but agree that she’s a dead ringer for the Hollywood A-Lister – the video already has 354.9K views as proof!

It’s not new for Tranel to be compared to Aniston. Her TikTok bio reads, “Not Jennifer Aniston.”