The Weeknd and Angelina turn heads with rumoured date

* The duo might have bonded over their shared love for Ethiopia; the Canadian-born singer's parents are from Ethiopia 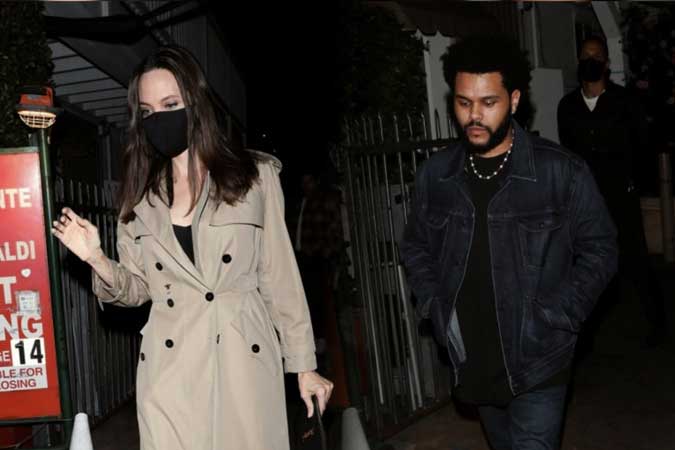 Well, this is a couple people certainly didn’t feel coming. Angelina Jolie and The Weeknd, were spotted out and about together at Italian restaurant Giorgio Baldi in Santa Monica, California per The Sun.

“The pair reportedly spent hours at the restaurant, before leaving separately to avoid raising suspicion,” The Sun stated.

The duo might have bonded over their shared love for Ethiopia-the Canadian-born singer’s parents are from Ethiopia, while Angelina adopted her 16-year-old daughter Zahara Marley from the east African country.

Plus, The Weeknd recently shared that he will be donating $1 million to Ethiopia while the country faces tension in its Tigray Region, per The New York Times.

The “Blinding Lights” artist shared his thoughts about Ethiopia’s current struggles on Instagram back in April.

Plus, The Weeknd recently shared that he will be donating $1 million to Ethiopia while the country faces tension in its Tigray Region, per
The New York Times

“My heart breaks for my people of Ethiopia as innocent civilians ranging from small children to the elderly are being senselessly murdered and entire villages are being displaced out of fear and destruction,” explained the 31-year-old star. “I will be donating $1 million to provide 2 million meals through the United Nations World Food Programme and encourage those who can to please give as well.”

On the rumoured date night, the Hackers actress, 46, kept it simple in a beige trench coat, black top and nude-pink heels. She wore her hair straight and down and finished the look with a clutch and face mask.

The Weeknd opted for a dark denim outfit from head to toe. Underneath his jacket, he wore a black tee and necklace, and rocked black boots.

Angelina has been involved in a nearly five-year-long custody dispute with ex-husband Brad Pitt over their children. The 46-year-old actress filed for divorce from Brad on Sept. 19, 2016. They first met on the set of Mr. and Mrs. Smith in 2004, while Brad was still married to Friends star Jennifer Aniston.

Affectionately dubbed “Brangelina” by fans, the A-list couple were together for 10 years before marrying in 2014, but split just two years after tying the knot. They share six kids: Maddox Chivan, 19, Pax Thien, 17, Zahara, Shiloh, 15, Knox Léon, 12 and Vivienne 12.

In between dating Bella, The Weeknd also dated Selena Gomez in 2017, who was in her own on-and-off relationship with Justin Bieber.