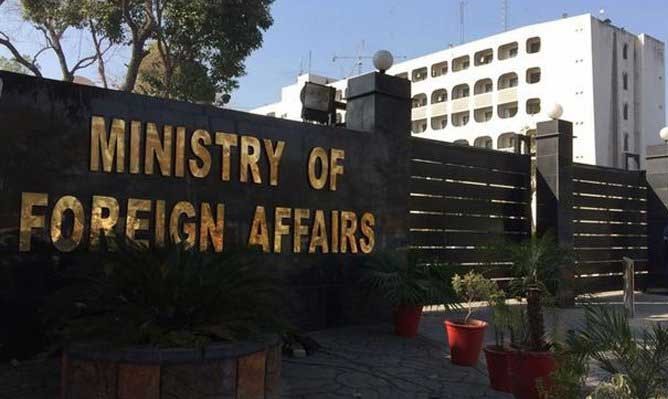 The statement came after the Indian foreign ministry claimed that a drone was sighted over the premises of the Indian High Commission in Islamabad on June 26.

“This has been taken up officially with Pakistan. We expect Pakistan to investigate the incident and prevent recurrence of such breach of security,” NDTV quoted the Indian Ministry of External Affairs as saying in a statement.

Responding to the claims, FO spokesperson Zahid Hafeez Chaudhri said, We have seen the Indian MEAs statement and reports in certain sections of the Indian media alleging a drone flying over the premises of the Indian High Commission in Islamabad. He said these preposterous claims are contrary to the facts and no proof whatsoever has been shared with Pakistan to substantiate these allegations.

Chaudhri pointed out that this propaganda campaign by India is happening at a time when evidence gathered in the recent Lahore blast was largely pointing to external forces with a history of perpetrating state-sponsored terrorism against Pakistan. Pakistan rejects these patently false allegations and diversionary Indian tactics and will continue to stand by the people of [Indian-occupied Kashmir] in their just struggle for the right to self-determination, as enshrined in the UNSC resolutions, h added.

Two days ago, the FO had also rejected the Indian allegations about Pakistans role in a drone attack in occupied Kashmir and termed them irresponsible. The use of Pakistan card either to win an election or to divert attention from an electoral defeat has also unfortunately become a standard practice, it had added.

Also on Friday, Pakistan strongly condemned the extra-judicial killing of a 17-year-old innocent Kashmiri boy by the occupational forces in Indian iIllegally Occupied Jammu and Kashmir. In a statement, Foreign Office spokesperson Zahid Hafeez Chaudhri said the extra-judicial killings, torture in custody, enforced disappearances and incarcerations have become a norm in IIOJK to suppress the Kashmiris.

Reportedly, the teenage cricketer Zakir Bashir was brutally tortured by the Indian occupation forces before being shot dead. The spokesperson said during this year alone, the Indian occupation forces have extra-judicially killed 57 innocent Kashmiris; arbitrarily detained and arrested 350 others; and destroyed 58 houses of the Kashmiri people. Indias gross and systematic human rights violations in IIOJK warrant investigation by the UN Commission of Inquiry (COI), as recommended by the Office of the United Nations High Commissioner for Human Rights (OHCHR) in its reports of 2018 and 2019. India must realize that no amount of brutalization can neither subjugate the Kashmiris nor break their will in their struggle for the right to self-determination, he said, and urged the international community to fulfill its obligation of protecting the defenceless Kashmiris against the egregious human rights violations in IIOJK and hold India accountable for its serious crimes against humanity.

Reports also emerged on Friday that five freedom fighters were martyred in the latest series of clashes in IIOJK that have left 17 dead in two weeks. The five youth died in a gunfight in the Rajpora area of the occupied valley that started Thursday night. The Himalayan disputed region has seen a new rise in unrest in recent weeks.