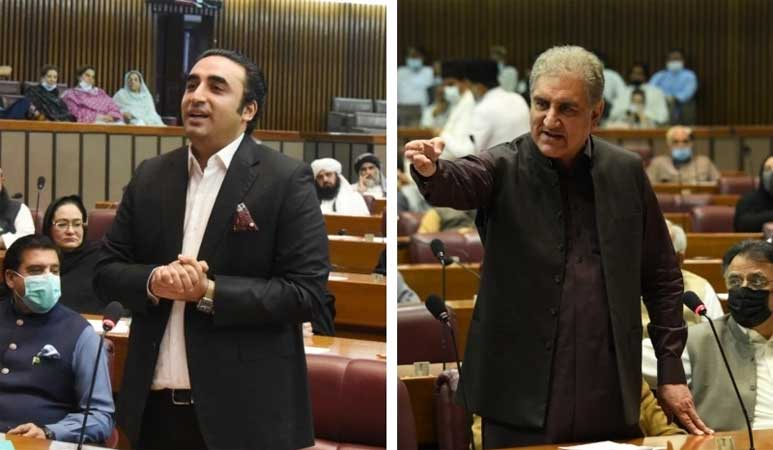 One stood wearing an ajrak pocket square, swayed by passionate desk-thumping as he made the mockery of parliamentary norms and became downright personal in his digs at the “learned member form Multan.” The other went a little too far in defending his country’s budget; calling a party supremo a “baby.” The latest to add to Islamabad’s ruckus were PPP’s Chairman, Bilawal Bhutto Zardari, and Foreign Minister Shah Mahmood Qureshi. As if the bit of parliamentary argy-bargy was not enough, the two seem to have taken their clash to the world of tweets. It clearly must have taken some winks for the FM to realise what Bilawal had accused him of. The last three days have been hostage to a fierce debate between them and their supporters on Twitter.

There was nothing wrong in Bilawal lambasting the provisions of the Finance Bill. After all, it is an unsaid tradition of the parliamentary democracy for the shadow cabinet to find fault with the treasury benches. Similarly, as a member of Kaptaan’s kitchen cabinet, Mr Qureshi was well within his rights to respond to fierce onslaughts in his absence. Yet, acting like a high-strung winter soldier, he skipped some lines and went for the jugular. Calling into question the violations of traditions in the Sindh Assembly (the opposition leader has always enjoyed the privilege to speak on the floor), was akin to skating on thin ice. Trouble was what he asked for and trouble was what he got. Heated allegations that hinged on backdoor deals on Kashmir and even talked of the need to tap his phone flew in all directions. In just one stroke, the Jiyala camp has cast a giant shadow over his poker-faced reputation.

All concerns aside, Bilawal’s choice for the punching bag was quite an interesting one. Frankly speaking, it is hard to believe he created a storm in a teacup without any reason. The foreign minister takes great pride in his cool and calm approach. Even after parting ways with the PPP, he has always been more reserved in his punches. The most notorious headline of his ministerial stint would probably be CNN anchor Bianna Golodryga branding him as ‘anti-Semitic’.

However, the Chairman might have spilt a little more than he ought to by talking about the SMQ’s premiership campaign during the Zardari era. Not too long ago, Multani stalwart had his heart set on the Lahori catbird seat. When the skipper put his foot down, Makhdoom wasn’t left with any other option but to dip his toes in foreign waters. Given his experience that spans over decades and a natural inclination to get along with all quarters, he has definitely built credentials that could appease powers that be, if the need arises. Wasn’t it only recently that the capital was abuzz with rumours of militablishment pursuing a Minus-IK model?

We’ve had more than our fair share of Junejos. It would certainly not be the first time when the establishment chooses to put weight behind someone for his perceived pliability. SMQ might be a good yes-man but he cannot even begin to fill the charismatic boots of Imran Khan. Like it or not, Khan still wins a million hearts with his compassion and fervour. Backing up his high-flying claims with changes that actually matter is another story altogether. But the cover of his story screams power SMQ seems incapable of. Now, we cannot make light of Mr Qureshi’s proficient handling of foreign affairs. His efficacious efforts to end the human tragedy in Palestine holds all the hallmarks of pristine diplomacy.

All in all, Bilawal still came out with a good deck of cards at the end of this nonsensical exercise. If all he had wanted were a few laughs and a frenzied foreign minister, job well done! Let’s just hope the overheating war within cools down and we don’t get to see a tit-for-tat. No one needs grown legislators to pick fights like unruly children.