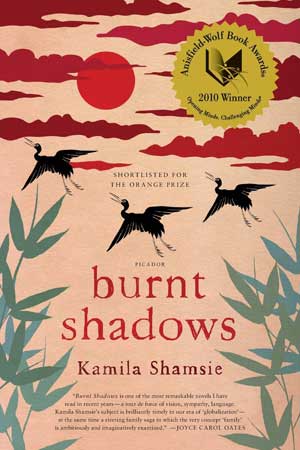 Migration like any other mass human activity has always been on the cards and it has been oscillating between its voluntary nature and involuntary as well.

In recent times migration is still playing major roles in making and reshaping the social set ups because migrations are now relatively more volatile and game changers as compared to the migrations of yore. The migration of 1947 in the Indian subcontinent can also be taken one of these and as a game in the lives of so many human beings.

The Pakistani fiction as well as Indian fiction in English in this regard has been voicing this aspect of the Indo Pak history. Just recently, Shamsie’s novel Burnt Shadows talked about the migration of the Sajjad’s family along with many people, especially Muslims, who were forced to migrate from their well settled and peaceful homes and to relocate in Pakistan after much pain and bloodshed. Same is the case with Train to Pakistan by Khushwant Singh wherein the atrocities committed in the name of migration have been fictionalized very successfully. The most significant of the migration because of partition voice is that of Bapsi Sidhwa, who, in almost all her novels, sets the stage of partitions and lets the things flow in this context. For example, her novel The Pakistani Bride, tells the story of a Lahori girl’s marriage with a Kohistani but the story was initiated because of migration in 1947. Same is the case with The Crow Eaters but her novel Ice Candyman is the most representative and significant voice of the suffering of the people of Indo-Pak subcontinent because of Migration in 1947.

Ice Candyman though written with a Parsee background, but provides an objective and unbiased account of migration and its fall outs through the tongue of an even impartial narrator Lenny. But before coming to this fall out, Sidhwa deliberates sets many pages to set up a context for this migration. Through the narrator we come to know about the colonial times Lahore where all seems peaceful as Lenny and Shanta roam about in the streets of Lahore and make us meet many people from all religions like Hindus, Muslims, Christians, and even Sikhs living side by side and engaging with each other happily and peacefully. But as soon the world war 2 ends and Indian nationalism plus movement for Pakistan begins to take shape, the question of who is who and what is what asserts itself. One scene from the Parsee household is symbolic of this situation where on a dinner table British, Sikhs, Muslim, Hindus and Parsee are present and fail to come on agreement as to who should get what.

Ice Candyman though written with a Parsi background, provides an objective and unbiased account of migration and its fallouts through the tongue of an even impartial narrator Lenny

This emerging conflict seeps into the lives of the common people too who suddenly changed their point of view about their neighbours and stressed their right on different pieces of land with such a vigour that there was left no room for argument and all got filled up with violence. The biggest story of violence is that of Shanta, the AYAH or Nanny of Lenny. She is very attractive young Hindu girl who came from Amritsar to work at the House of the Parsees. Sometime loved and wanted by so many, suddenly becomes the target of violence when she is dragged out of the Parsee household and is molested by the rioters and ultimately is conveyed to the red-light area of Lahore as singing and dancing girl by one of her past lovers, apparently to save her. She is later rescued by the godmother of Lenny and sent to her village. She is the one who is punished for her religion even without migration. Same is the case with Hamida, the second servant at the Parsee household. Hamida is one of the women who migrated from India to Pakistan and on the way to Pakistan the atrocities of bloodshed, murder and rape make them lose their families. Now Hamida is the tale of violence written on her body.

But more so, the partition of India resulted in the similar violence upon the people who refused to migrate on the advice of the British government and the assurance of the political leaders of that time. Sidhwa voices this by narrating the partition atrocities through the village of Pir Pindoo, the village Imam Din belonged and Lenny travelled to for fun. Men, and women, killed, young women raped and children left without their parents. Ranna, for example, the childhood friend of Lenny, in the novel, reaches Lahore after getting bruised, injured at many places and after losing all his family members. The rehabilitation house for the left alone women adjacent to Lenny House reverberated the pain, sufferings and injuries of the women who migrated from India is microcosm of the overall sufferings of migration. The protagonist of the story, the Ice Candyman, too is the victim of this migration. He too loses his family who were travelling by train to meet his but could not make it. All these characteristics of the novel Ice Candyman by Sidhwa make it the most powerful tale on voluntary and involuntary migration in 1947 and is very useful in transferring our history to our next generations.

The article has been written and contributed by Professor Dr Zia Ahmed who is a professor of English at Government Emerson University, Multan. He can be reached at zeadogar@hotmail.com and Tweets at @Profzee