No one dare to bully, oppress or subjugate China, warns Xi 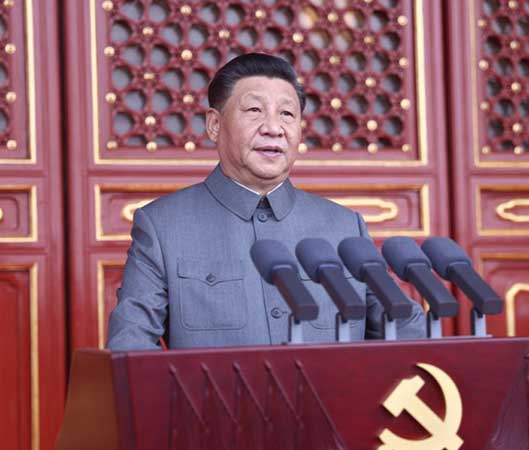 Chinese President Xi Jinping on Thursday warned that foreign powers will ‘get their heads bashed’ if they attempted to bully or influence the country.

“We will never allow anyone to bully, oppress or subjugate China. Anyone who dares try to do that will have their heads bashed bloody against the Great Wall of Steel forged by over 1.4 billion Chinese people,” the Chinese president said at an event marking the centenary of the ruling Communist Party.

In a speech before a crowd of 70,000 in Tiananmen Square in Beijing, Xi praised the ruling party for lifting China out of poverty and humiliation, and pledged to expand China’s military and influence. Standing at the Gate of Heavenly Peace above a portrait of Mao Zedong, Xi said the era of China being bullied had ‘gone forever’. “We will not accept sanctimonious preaching from those who feel they have the right to lecture us,” he said. “We have never bullied, oppressed, or subjugated the people of any other country, and we never will,” he went on to say. “By the same token, we will never allow anyone to bully, oppress, or subjugate [China]. Anyone who tries will find them on a collision course with a steel wall forged by 1.4 billion people,” he reiterated.

In his speech, Xi said a strong country must have a strong military to guarantee the security of the nation, and the People’s Liberation Army had made “indelible achievements”. It was a “strong pillar” for safeguarding the country and preserving national dignity, sovereignty and development interests, not just in China but in the region “and beyond”, he said. The party must maintain “absolute leadership” over the military, which must be grown and elevated “to world-class standards”, he said. “No one should underestimate the resolve, the will and ability of the Chinese people to define their national sovereignty and territorial integrity,” he added.

Xi’s speech charted the history of the CPC from its origins in Shanghai in 1921, to its place today, declaring it had achieved its first centenary goal of building a “moderately prosperous society in all respects”. “We eliminated the exploitative feudal system that had persisted in China for thousands of years and established socialism,” he said. “The Chinese people are not only good at destroying an old world, but also good at building a new world. Only socialism can save China, and only socialism with Chinese characteristics can develop China,” he asserted.

Xi said without the party there would be no new China, and it had “profoundly transformed the advancement of the Chinese nation”. “It is the foundation and lifeblood of the party and the country, and the crux upon which the interests and wellbeing of all Chinese people depend,” he added.

Xi said China maintains an “unshakeable commitment” to unification with Taiwan. “No one should underestimate the resolve, the will and ability of the Chinese people to defend their national sovereignty and territorial integrity,” he said. “We are now marching in confident strides toward the second centenary goal of building China into a great modern socialist country in all respects,” he went on to say. “We are eager to learn what lessons we can from the achievements of other cultures, and welcome helpful suggestions and constructive criticism. We will not, however, accept sanctimonious preaching from those who feel they have the right to lecture us,” he added.