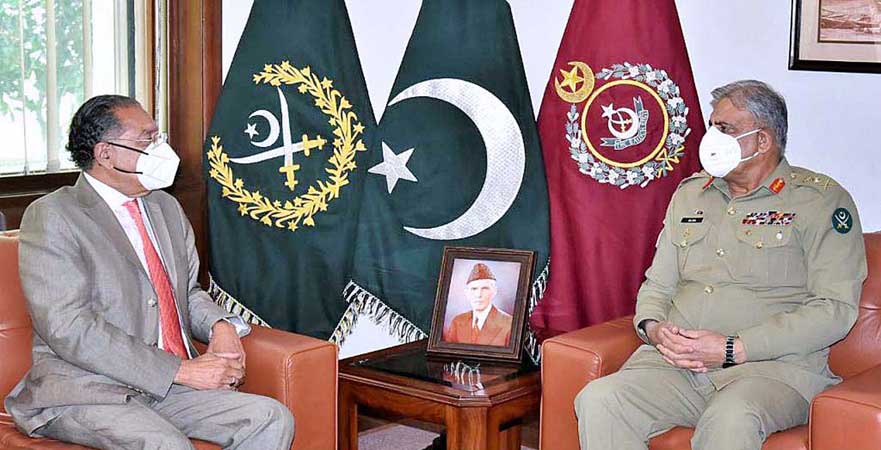 Chief of Army Staff (COAS) General Qamar Javed Bajwa has appreciated the role and efforts of the Pakistani Mission at the United Nations (UN).

The Army chief expressed these views while having a meeting with the Permanent Representative of Pakistan to the UN Ambassador Munir Akram who called on him at the General Headquarters (GHQ) on Thursday, the Inter-Services Public Relations (ISPR) said in a statement. During the meeting, matters of mutual interests, overall regional security, including the Afghanistan reconciliation process and the Kashmir dispute were discussed, the ISPR said.

Earlier on Wednesday, while addressing National Defence University (NDU) participants of the National Security and War Course (NSWC), the Army chief said that a well-equipped, trained and motivated Army that has the unwavering support of its people can surmount any challenge. He emphasised that those forces wishing to undermine the unbreakable bond between the armed forces and the nation were bound to fail, according to the ISPR news release. The Army chief expanded on the evolving strategic and regional environment. Pakistan stands for peace within and all around, as it looks forward to acting as a bridge between regions, the COAS said. On Pakistan’s support for the Afghan peace process, he said that spoilers of peace in Afghanistan risked regional instability.

Expressing resolute support to the people of Indian-held Kashmir (IHK), Gen Bajwa stressed that a peaceful and durable solution of the Kashmir issue in line with the relevant UN Security Council resolutions as well as the aspirations of the Kashmiri people. Sharing his vision of the Pakistan Army, he underscored the need for continuous evaluation of existing doctrine and corresponding strategy to effectively deal with the evolving threats in various domains. He termed professionalism, competence and devotion to duty as hallmarks of Pakistan Army and emphasised on realistic and futuristic training for maintaining perpetual operational readiness.

Force modernisation and induction of advanced technologies are imperative for maintaining a qualitative edge over adversaries, he remarked. Congratulating the participants on successful completion of their course, the COAS advised them to stay focused on attaining professional excellence while remaining abreast with revolutionary advancements in warfare which are redefining national security.