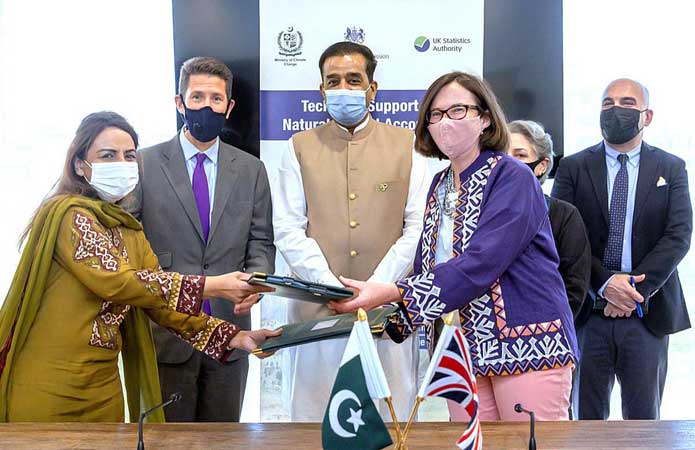 Special Assistant to Prime Minister on Climate Change Malik Amin Aslam has said that the earth’s natural resources, biodiversity and ecosystems, which collectively make up our planet’s core natural capital, is now at risk of fast depleting because of over-exploitation the resources.

“However, sustainable use of the natural capital, which actually provides the foundation for sustainability of the life on earth and overall socioeconomic development of current and future generations, is vital to its sustainability for generating ecosystem services for the lasting human well-being,” he said while addressing a high-level regarding signing of ‘Letter of Support on Natural Capital Accounting (NCA)’ between the British High Commission Islamabad, UK Statistics Authority and the Ministry of Climate Change held here on Thursday.

Both sides pledged to work together to introduce the concept of the natural capital accounting system and its implementation for conservation and protection of natural resources, biodiversity and ecosystems.

Thus, regulating services through their accounting and efficient use helps make the planet livable for humans, and include carbon sequestration of forests and the moderation of extreme events such as the role of mangroves in flood and storm surge mitigation, he added.

“All of these services that nature provides, which we often take for granted, are in various stages of degradation and they continue to be at risk of fast depleting,” he cautioned.

The PM’s aide highlighted the persistent invisibility of natural capital has resulted, by large, from the reality that ecosystems services and biodiversity benefits have historically not been quantified according to dollar values and it can be extremely challenging to value these benefits in such terms.

As a result, natural capital is often undervalued or neglected in decision-making, which contributes to more biodiversity loss, and ultimately impacts human well-being. For example, infrastructure and road development projects have historically been carried out with little to no attention to the short- or long-term impacts of these activities on natural ecosystems and biodiversity, he added.

“Therefore, to ensure long-term human well-being, decision-makers across all economic sectors, such as transportation, agriculture, and energy, the world must recognise importance of the interconnectedness between economic activities and ecosystems as highlighted in global strategies and goals for development and biodiversity. These include the Sustainable Development Goals, which are currently being elaborated, and the Aichi Targets,” said.

Malik Amin Aslam, however, said that Prime Minister Imran Khan-led incumbent government is very much aware that the accounting of natural capital is of unprecedented significance as far as achieving the sustainable management of natural resources in context of their contribution to socioeconomic development and its implications is concerned.

“However, support of the UK government in assisting Pakistan for framing and implementing of policies and programmes for natural capital accounting is of paramount importance. Because, the UK is globally recognised as one of the global leaders in development of natural capital accounts systems/procedures and their integration into policymaking,” the PM’s aide told the event participants. He hoped that the agreement between British and Pakistani governments would go a long way in boosting latter’s capacity to mainstream natural capital accounting into policymaking at social, economic, environmental, energy and food security levels as well as enhancing the country’s climate resilience.

Addressing the ceremony, British High Commissioner Christian Turner highlighted the diversity and importance of the Pakistan’s natural resources and their vitality for sustainable socio-economic and environmental development.

He said: “Pakistan’s natural biodiversity is one of its greatest assets. Climate change threatens that, and the water supply on which the country depends. This UK assistance will help Pakistan manage its natural assets efficiently and attract much-needed finance.” While speaking, UK Development Director Annabel Gerry, who signed the letter of support on behalf of the UK government vowed to extend all-out technical support in implementing the Natural Capital Accounting concept in Pakistan to help protect and conserve the country’s natural resources while feeding the national socio-economic development in a sustainable way. She said, ‘With this technical capacity Pakistan will be able to apply Natural Capital Accounting methods and to value its natural assets accurately.”