Pakistan can only be partner in peace: PM 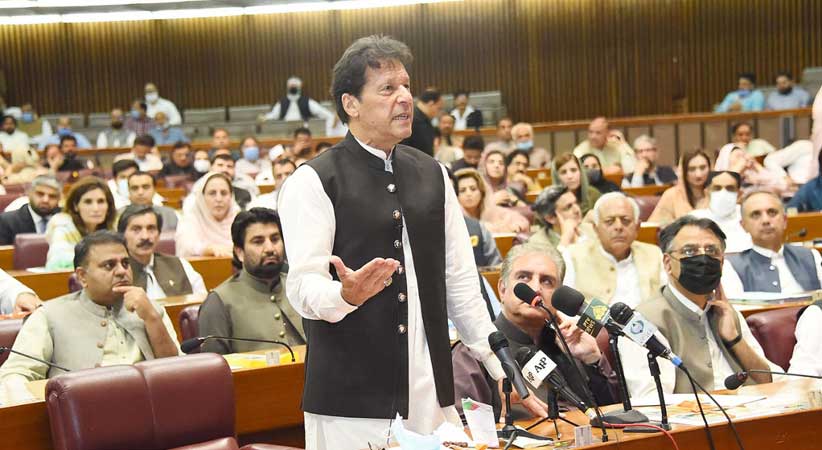 Prime Minister Imran Khan on Wednesday stressed that Pakistan can partner with the United States in peace but not in war or conflict.

“The US was defeated in Afghanistan and they tried to shift the blame of their defeat on us,” Imran Khan told the National Assembly, amid a thunderous banging of desks, even by the JUI-F lawmakers. He said the Afghanis are brothers of Pakistanis and Islamabad knows them better than Washington. “We have decided to not comprise on the country’s sovereignty,” he stressed.

Imran Khan said the US is trying to force Pakistan to bring the Afghan Taliban to the negotiating table. “But we do not wish for strategic depth in Afghanistan and we will respect the decision of the Afghans,” he maintained. “Pakistan chose to aid US in war against terror but after that, we captured our own people and sent them to Guantanamo Bay – and former president Pervez Musharraf admitted this,” he further said. “We sacrificed 70,000 people and wasted $150 billion in the war against terror,” he said, adding that after the Tora Bora incident, Al Qaeda started its operations in Pakistan. “We received directions to send our troops to the tribal areas in pursuit of a few hundred people,” he said, and noted that the people living in tribal areas paid a hefty price.

Imran Khan said at the time of the war on terror, Pakistanis were unable to differentiate between their friends and enemies. “Does a country launch an attack on its ally?” he asked. “The government during the war on terror did not have the courage to say no to the US and kept on lying to the people,” he said. “We must understand that when a nation does not respect itself, it is not respected by the world […] we only want peace to prevail in Afghanistan, and that is in our best interest,” he added.

On the domestic front, Prime Minister Imran Khan invited the opposition parties to sit with the government for improving and reforming the electoral process for the sake of future of democracy in Pakistan. “Since the elections in country have been controversial after 1970, we are striving to improve the election process. We have proposed election reforms and I will request the opposition to sit with the government, as it pertains to the future of democracy in Pakistan,” he said.

Imran Khan also referred to his 21 years of cricketing experience and said the controversies of defeat and victory in the international cricket only ended after the introduction of neutral empires and the support of modern technology.

The Prime Minister also mentioned the campaign of Pakistan Tehrik-e-Insaf (PTI) after the 2013 general elections, when his party wanted the audit of only four constituencies, but the then government did not accept the demand and later the matter was decided by the court. He said that the introduction of electronic voting machine (EVM) in elections besides ensuring transparency will also expedite the process of announcement of election results. He said the government is also ready to listen to the opposition parties if they have any better proposal for election reforms.

Imran Khan said that despite the inherited major challenges including the US $20 billion of current account deficit and the fear of default, his government stabilized economy through inevitable hard decisions which also hit the common man. He referred to the similar situation faced by Turkey before President Recep Tayyip Erogan put their economy on track through corrective measures.

“Times come in the history of nations when they have to face hardships for the sake of country,” he said, and thanked friendly countries including United Arab Emirates, Saudi Arabia and China for their financial support to Pakistan in difficult situation, which saved the country from default.

He further said that initially his government had been striving to avoid from going to IMF, but later it had to go to IMF to fulfill the country’s fiscal needs.

The prime minister also mentioned his government’s successful strategy of dealing with the Covid-19 pandemic, which helped recover the country from the negative economic effects of the pandemic that impacted the whole world. He said despite the pressures and criticism from opposition and media, his government did not go for complete lockdown and adopted the policy of identifying hotspots through “trace and track” and opted for smart lockdowns to protect daily-wagers and laborers from economic hardships.