Bilawal, Qureshi take dig at each other during NA session 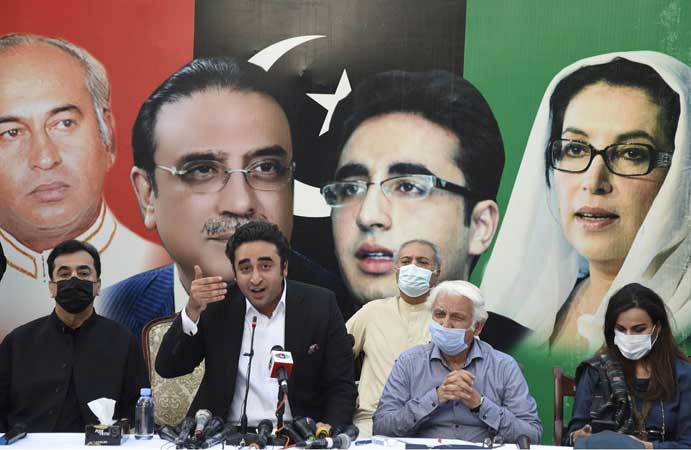 PPP Chairman Bilawal Bhutto-Zardari and Foreign Minister Shah Mahmood Qureshi engaged in a fiery debate in the Lower House on Wednesday, raising the temperature of the National Assembly.

As the session resumed, Speaker Asad Qaiser gave floor to Bilawal to deliver his speech. He first accused the speaker of not protecting the rights of the opposition members, saying that “the whole nation saw that if you had not rigged the parliamentary process, you wouldn’t have received 172 votes.”

Taking a dig at Finance Minister Shaukat Tarin, Bilawal said that an ‘unelected member’ kept rejecting the opposition’s amendments. Citing the rules of business to run the House, the PPP chairperson pointed that as per Rule 276, if there is a voice vote challenge, the speaker has to count it. He said he challenged the vote during the last phase of the legislation but the speaker did not listen to him. “What else is it, if not rigging?” the PPP leader asked, before concluding his speech.

Soon after his speech, Bilawal left the House. However, he returned when the foreign minister challenged him to come back and respond to him.

The temper of Foreign Minister Qureshi flared as Bilawal urged the prime minister to tape his phone. “For which parliamentary norms you are talking about that provincial finance minister was not allowed to speak in the Sindh Assembly,” Qureshi said, asking that even opposition members not allowed to speak on the floor of the Sindh Assembly. “Is this a parliamentary tradition?” he questioned.

The minister was repeatedly interrupted by PPP lawmakers who started making noise and shouting in the House during his speech.

While lashing previous governments’ policies, the foreign minister recalled that the nation knows well how national money had been looted in the past, and who did this.

Qureshi rejected the PPP leader’s accusations and said that he knows Bilawal “since he was a little kid”. “I have known you since you were a kid and I also knew your parents as well,” he added.

Bilawal again entered a ‘war of words’ when he exchanged heated remarks in response of foreign minister’s speech. “Mr Speaker let me tell you, Imran Khan, and the entire House who this person is (Qureshi) actually whom I know from my childhood?” “I saw him while sloganeering Jiye Bhutto, Zardari Zinda Bad since my childhood,” the PPP chairperson chided foreign minister, adding that Imran Khan should recognize the reality of this person who has even compromised the Kashmir cause.

“When he (Qureshi) used to be our foreign minister, he ran a campaign around the world to make him the prime minister, instead of Yousaf Raza Gillani,” Bilawal said. “That is why we had sacked him from the post of foreign minister,” he recalled.

Let the record be clear that the Foreign Minister of Pakistan does not have a sense of humor. https://t.co/YkWinIzZaZ

Earlier, in his address, former prime minister Shahid Khaqan Abbasi said he supports everything said by the PPP chairperson. Abbasi, like Bilawal, turned his guns on Speaker Asad Qaiser, criticizing him for not honoring agreements with opposition members. “We sit with you and reach agreements time and again but no attention is paid towards them,” he complained.

The PML-N leader said that as per the rules of the House, whenever a vote is cast or recorded, it should be recounted as well.

Speaking about incarcerated MNAs Khursheed Shah and Ali Wazir Khan, Abbasi recalled they also had the right to sit in parliamentary proceedings. “Khursheed Shah is one of the oldest members of this House,” he claimed. “Didn’t you see Khursheed Shah’s chair vacant for the past two years?” he added.