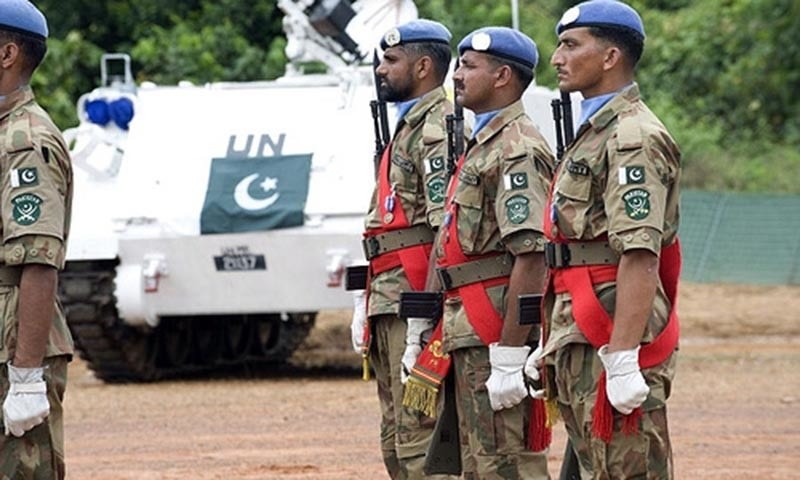 UNITED NATIONS: Pakistan has reaffirmed its support for a zero-tolerance policy for sexual misconduct at a high-level meeting this week on strengthening the conduct of UN peacekeeping personnel.

“Protectors of vulnerable, under no circumstances, can be allowed to become the abusers,” Ambassador Aamir Khan, acting Pakistani permanent representative to the UN, said as he renewed Pakistan’s strong commitment to combat the menace of sexual exploitation and abuse across the UN system.

“The exemplary work of thousands of brave men and women cannot be allowed to be sullied by the abhorrent acts of a few,” he added.

At the start of the meeting, the UN Secretary-General Antonio Guterres said through video-link that successful peacekeeping requires the “highest standards of conduct” by civilian and uniformed peacekeepers.

In his remarks, the Pakistani envoy commended the UN chief’s proactive approach in addressing the menace of sexual exploitation and abuse by bringing greater accountability and transparency on this issue. The secretary-general’s advocacy and practical measures, he said, have produced results: allegations of sexual abuse in peacekeeping missions are below the average for the last 10 years.

“Conduct of peacekeepers is indeed vital to preserving the credibility and integrity of the United Nations,” Aamir Khan said.

Pakistan, he said, takes immense pride in the high standards of conduct set by its peacekeepers in the last six decades.

“Despite serving in some of the most challenging peacekeeping missions, Pakistani contingents have a rich history of professionalism, devotion and commitment to the UN Charter and to the UN code of conduct”, he said.

Currently, Pakistan serves in 9 out of 12 UN peacekeeping missions, executing a host of multidimensional mandates – from protection of civilians to humanitarian assistance and infrastructure development,” it was pointed out.

“Our personnel oversee peace agreements while engaging in robust peacekeeping to deter miscreants and assisting the host states in the rule of law, institution building and security sector reform,” Aamir Khan said.

With growing focus on responsible community engagement, he said, Pakistan has deployed female peacekeepers as doctors, nurses, gender advisors and vocational trainers. In 2019, Pakistan dispatched its first all- female community engagement team to Africa. This team, he said, undertook several successful initiatives for local population, including vocational trainings for students, teachers and women and psychological workshops for police officials.

In addition, Pakistan has made a concerted effort to ensure impact-driven peacekeeping trainings, based on the standards and materials developed by the UN Secretariat, the Pakistani envoy said, adding that Islamabad’s Center for International Peace and Stability (CIPS) offers training programmes with specialized modules on prohibited behaviour, including sexual exploitation and abuse.

Besides, Pakistani peacekeepers, around 250 personnel from friendly countries, including 22 female peacekeepers have so far received training at CIPS.

The Armed Forces of Pakistan, when deployed to a UN Mission, remain subject to their respective Services Laws and Acts, he told the meeting, noting that every Pakistani Infantry Battalion and Formed Police Unit has an in-built accountability mechanism, with National Investigative Officers, who are specialized personnel, well trained to investigate heinous offences, including sexual exploitation and abuse.

These officials, he said, are mandated to share investigation reports of any misconduct with commanding officer and through the chain of command with relevant UN officials. “Our Commanding Officers are empowered with ample investigative, disciplinary, criminal and administrative authority to handle offences committed by personnel under their command.”

Pakistan was also among the first group of countries signing the Compact with the Secretary-General to eliminate these offences and contributed to the United Nations Trust Fund supporting the victims.

Pakistan was also the first country to endorse the Declaration of Shared Commitments in which “conduct” features as one of the main themes, he said.

In his message, the UN Secretary-general said although the “vast majority” of UN personnel live up to the highest standards of conduct, any lapse not only has “a devastating impact on victims and survivors”, but also “undermines our operational efficiency and our global reputation”, explained Mr. Guterres.

As the organization works to increase transparency, strengthen internal accountability, and emphasizes the needs and rights of victims and survivors, steady progress has been made on improving training and reporting misconduct with member states “vital partners in all these efforts”, he said.

Under-Secretary-General for Peace Operations Jean Pierre-Lacroix reminded that conduct and discipline have been part of the Action For Peacekeeping initiative, known as A4P, since its inception. He also stressed the importance of being proactive in understanding where the gaps lie.

While sharing good practices in prevention and enforcement, the top UN peacekeeper emphasized the need to “build on what is working and what demonstrates potential”.

At the same time, he underscored the need to address challenges, such as timely investigations, ensure that sanctions are commensurate with the gravity of misconduct and support victims of sexual exploitation and abuse.