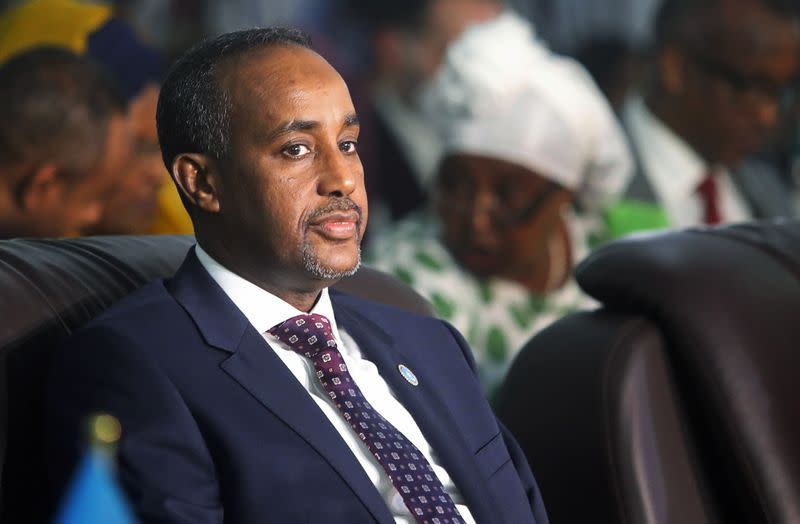 Prime Minister Mohamed Hussein Roble’s office unveiled the timetable for indirect parliamentary and presidential elections on Twitter, saying political leaders had agreed to a roadmap for a vote after two days of talks in the capital Mogadishu. “I commend the leaders of the council and hope the election will be a peaceful and transparent one, based on the agreed upon schedule and processes,” the prime minister said. President Mohamed Abdullahi Mohamed and the leaders of Somalia’s five states had been unable to agree on the terms of a vote before his term lapsed in February, triggering an unprecedented constitutional crisis. The political impasse exploded into violence in April when negotiations collapsed and the lower house of parliament extended the president’s mandate by two years, sparking gun battles on the streets of Mogadishu. Under pressure the president, commonly known as Farmajo, reversed the extension and ordered his prime minister to reconvene with the state leaders to chart a fresh roadmap towards elections.

In May, the warring leaders announced plans to commence the multi-stage election process within 60 days, helping ease political tensions. The timetable announced Tuesday schedules elections for the upper house on July 25, and the lower house between August 10 and September 10. Both houses are then convened and a vote for the president held on October 10. “At least we know when the election is taking place now, I hope there will not be any other complications starting from today and the election takes place seemingly as scheduled,” Abdifatah Ibrahim, who is seeking a seat in parliament, told AFP.

“We have been waiting this for so long.”

Suado Mohamed, a member of a women’s association, echoed him. “Today everyone is relieved, and the country is prepared now to go for the election,” she said. Somalia has not held a direct one-person, one-vote election since 1969, the year dictator Siad Barre led a coup and went on to rule for two decades. Barre’s military regime collapsed in 1991 and Somalia fell into anarchy. Repeat efforts to organise such a ballot since have been scuttled by security problems or lack of political will. The upcoming election, like others past, follows a complex indirect model. Special delegates, chosen by the country’s myriad clan elders, pick lower house MPs while senators are nominated by state presidents and then endorsed by local legislatures.

This election was to go further in terms of inclusivity, with double the polling locations and almost twice as many delegates voting as the last election in 2017. Women candidates will pay less to register, Roble said, in the hope of boosting female electoral participation. Mogadishu and the states struck a deal last September paving the way for elections and a vote for the presidency by February this year. But distrust between Farmajo and the states over key appointments to crucial election committees, fears of rigging, and concerns about securing the vote itself scuttled the plan. Months of UN-backed negotiations failed to get the timetable back, and international sanctions were threatened if the troubled Horn of Africa nation did not hold elections soon. The country still battles the Al-Qaeda-linked Al-Shabaab group, which controlled Mogadishu until 2011 when it was pushed out by African Union troops, but still holds territory in the countryside.