Govt all praise, opp up in arms over ‘easy’ passage of budget 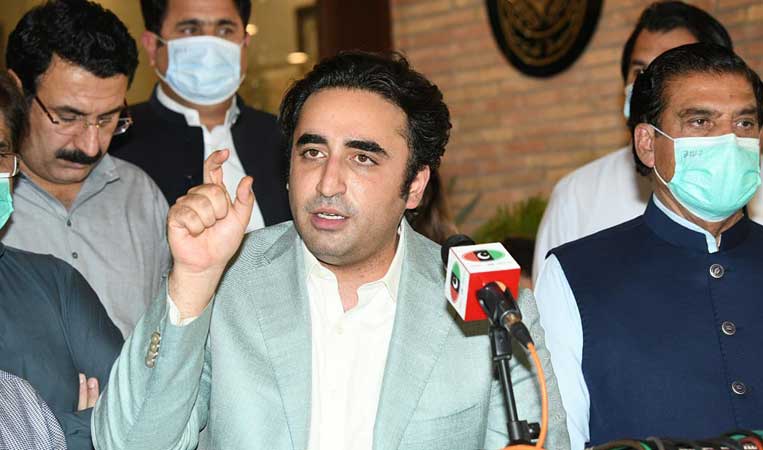 As the federal budget for the financial year 2021-22 sailed through the National Assembly on Tuesday, government members were all praise for the ease with which it was passed, while opposition members cried foul, saying it had been ‘forced through’.

Pakistan People’s Party (PPP) Chairman Bilawal Bhutto Zardari said the absence of PML-N President Shehbaz Sharif from the budget session of National Assembly is not a ‘good precedent’. Responding to a question regarding absence of Opposition Leader Shehbaz Sharif, Bilawal said he is only answerable for his party’s MNAs. “However, the absence of PML-N president is not a good precedent,” he told a press conference in Islamabad after the Lower House of Parliament passed the Finance Bill 2021-22 with majority amid opposition parties’ protest. “All PPP lawmakers including Co-chairperson Asif Ali Zardari attended the session,” he added.

Bilawal said the budget for the fiscal year 2021-22 had been passed ‘illegally’ and it had ‘no legal standing’. He said National Assembly Speaker Asad Qaiser had usurped the rights of the lawmakers by not holding recounting of voice vote. “I strongly condemn this act of speaker and if he [Qaiser] does not rectify his mistake then this budget would be considered illegal,” he added. He also vowed to challenge the budget at all available forums.

The PPP chairman said the government had passed the budget on the demands of International Monetary Fund (IMF) and did not allow the opposition lawmakers to present cut motions and raise their objections.

PPP leader and daughter of former president Zardari, Bakhtawar Bhutto said in a tweet that his father attended the court hearing and NA session ‘despite underlining health conditions’. However, she added that only 14 out of 84 PML-N members came to oppose the ‘PTI-IMF budget’. “My father went to court this morning and despite underlining health conditions and risk of exposure still went to National Assembly – so did 54 out of 56 #PPP members (missing two had Covid). We remain in #Pakistan. 14 out of 84 members from #PMLN came to oppose #PTIMF budget,” she wrote on her official handle.

Responding to criticism over Shahbaz’s absence from the session, PML-N General Secretary Ahsan Iqbal said that it was because his cousin had passed away. He said a “vast majority” of PML-N members were in attendance. He said that six members of the PTI were not in attendance, noting that 172 had come.

Iqbal said that the opposition effectively highlighted the budget’s shortcomings. “This was the first budget in Pakistan’s history in which the government was forced to take a U-turn,” he remarked. I

Minister for Information Fawad Chaudhry said that the budget passed “with great ease”, adding that “such a huge development budget has never been passed in Pakistan’s history”. He noted that nearly all government representatives were in attendance, while also observing that the PML-N’s numbers had been low.

From the PPP, 54 out of 56 were present with the remaining two absent due to coronavirus. From the PML-N, among the total 84 MNA, only 14 reportedly showed up. According to the PTI’s chief whip in the National Assembly, Amir Dogar, 172 government members were present when the voting took place and four more arrived later and their votes were not counted. “The parliament once more expressed its faith in the prime minister by a heavy majority,” he said.

Chaudhry also questioned the absence of the Leader of the Opposition in the National Assembly Shahbaz Sharif. “It appears that the power crisis within PML-N has worsened,” he said, adding: “The tussle between Maryam Nawaz and Shahbaz Sharif is resulting in the loosening of the leadership’s grip over the party.”