Sonia Boyce’s kaleidoscopic collage gets under your skin

* Unsurprisingly, there is a lot of skin in this exhibition — not the peep show kind, but a vibrant film that covers all the plinths and climbs up the walls and on to sculpture 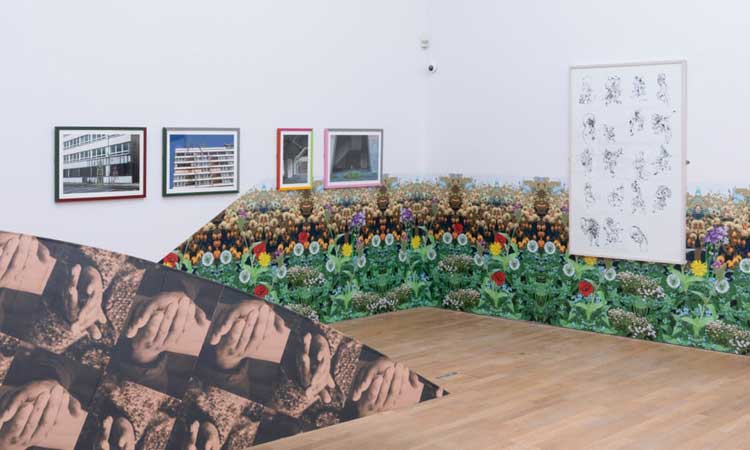 Our skin holds us in, is protective but porous, commonplace yet entirely unique.

The largest organ, it carries us through the world defining how we feel physically and how we are perceived socially. To exist day-to-day without thinking of it is a privilege afforded to those with the gender, skin colour, health and physique of the accepted hierarchies. Sonia Boyce’s exhibition at Middlesbrough Institute of Modern Art is acutely aware of this. Named after the autobiographical novel of colonial revolt by George Lamming, In the Castle of My Skin, the show explores skin through “castle” as an empowering safe place and “castle” as an inescapable prison.

Unsurprisingly, there is a lot of skin in this exhibition – not the peep show kind, but a vibrant film that covers all the plinths and climbs up the walls and on to sculpture. Making use of wallpapers she has been developing since the 1990s, Boyce plasters a kaleidoscopic collage of dancing figures, song lyrics, photographs and natural scenery across the white cube and over jagged sculptures that mimic the shape of fool’s gold and act as a display cabinet for the other, smaller artworks.

Eyes are drawn heavenward by the largest of these sculptures that greets us as we enter the first double-height gallery. An old plane wing is clad in a patchwork of contorting figures and song lyrics. Everything is moving: my eyes across the surface area, my body around the giant structure, the illustrative bodies bending, falling and climbing and the song lyrics that announce “should I stay or should I go?”, “moving on up”, “we gotta get out of this place” and “Get up! Stand up!”. The union of rocket formation with the lyrics “fly me to the moon” implies that the sculpture itself might only be resting a moment before blasting off to better times.

Eyes are drawn heavenward by the largest of these sculptures that greet us as we enter the first double-height gallery. An old plane wing is clad in a patchwork of contorting figures and song lyrics

The first black woman to enter the Tate’s collection, to be elected a Royal Academician and to represent Britain at the coming 59th Venice Biennale, Boyce is aware of how the status quo needs to be moved on, climbed over, sent shooting off into space to make room for more voices like hers. Of art school, Boyce told the Guardian’s Charlotte Higgins “as a black person, there wasn’t a narrative at all”. The expanding wallpaper skin that adorns the four downstairs galleries at MIMA is like Boyce trailing her hand around the space, covering it in her own fingerprints, thoughts and narratives.

There is no sense that this skin is a territorial act where Boyce is asserting her own individualism; rather, she is opening the door for more diversity to follow. In gallery two, her brilliant Devotional Wallpaper and Placards slathers the walls with the names of 200 black female musicians. Despite seeing this work before, it is still totally arresting and demands lengthy viewing. In a simple black font, surrounded by swirling black lines, names such as Beverley Knight, Hinda Hicks, Vanessa White and MIA run floor to ceiling and read like an impressive festival lineup. It is a public document that records forever the important influencers that often get ignored in male, white-centred histories.

In true inclusive form, there are more works in this exhibition by artists that are not Boyce. In the Castle of My Skin also hosts pieces by 12 contemporary artists and a selection from the Middlesbrough Collection. A number of these pick up on Boyce’s narrative threads and run with them. Opposite Devotional Wallpaper and Placards, an intriguing video by Anna Barham reveals the interior of a computer-generated mouth that clicks its teeth and wiggles its tongue. Alongside the names of 200 vocalists, the work reminds of the physical act of singing, of opening a mouth wide and projecting, transforming the monochrome record into full-bodied individuals.

A sculpture by Alberta Whittle and a video by Harold Offeh build on the contortions in Boyce’s wallpaper figures. While Offeh’s Selfie Choreography performance considers how we distort our physical form to project an acceptable image of ourselves on to the world, Whittle’s figurine with a black cloth face and rainbow ribbon body bent under a limbo bar captures the painful formations enslaved peoples had to enact to survive overcrowded ships.

The development of the exhibition has been put together through a process of “improvisation” but a lot of the time it feels like a private word association game. Emma Bennett has painted a captivating, graphic mural across one wall in response to Bridget Riley’s Fragments, but without some obscure mental gymnastics, I can’t work out what that has to do with Boyce’s work. Likewise, Cornelia Parker’s explosion drawing, Paulo Bruscky’s stamps and Carol McNicoll’s candlesticks are a step too far for me to follow. For an exhibition with her name in the title, it would have been good to see more work from Boyce.

Sonia Boyce: In the Castle of My Skin is at Middlesbrough Institute of Modern Art until 10 October.