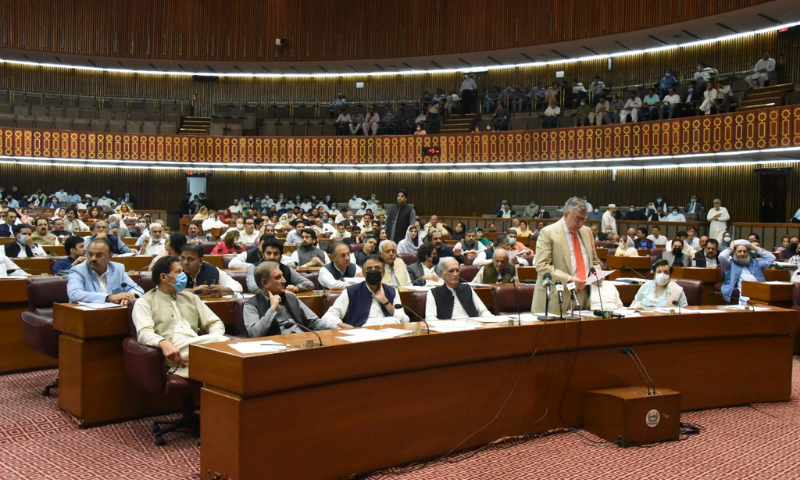 The National Assembly passed the budget for the next fiscal year with a majority vote on Tuesday, despite the opposition’s dismal showing.

After the clause by clause reading was completed, a voice vote was conducted by the NA speaker and the budget was passed.

The opposition did not challenge the voice vote as they knew they did not have the required numbers.

The session was adjourned till Wednesday.

The government had already defeated the opposition earlier on a motion moved by Finance Minister Shaukat Tarin for taking up the bill under consideration with a majority — 172-138 — vote.

Earlier, Tarin lashed out at the opposition for its criticism of the government. He said that only food inflation had increased during the PTI government’s tenure and attributed this to the policies of past governments.

He said that the government will go after willful tax defaulters, adding that it was necessary to enhance the tax to GDP ratio to 20 percent.

The minister also dispelled the opposition’s claims that indirect taxes had been imposed, adding that the majority of Pakistan’s trade sector was not under the tax net. “Consumers are paying it but we are not receiving it,” he said, adding that the government will also focus on this.

PPP leader Syed Khursheed Shah criticised the budget because of the addition of a multitude of taxes prior to the finance minister presenting it in the NA.

He estimated that the government had proposed taxes collectively amounting to around Rs1,100-1,200 billion.

The budget failed to meet expectations, he regretted.

Shah added that a good budget ensured that people had food on their tables as “people’s wellbeing is symbolic of a good economy”.

The PPP leader also lamented that health and education sectors remained largely ignored in the budget this time around as well.

He particularly expressed concern over the fast population growth in the country, raising doubts that the government had any plan to meet with the demands of this fast growing population.

The rapid population growth is an “atom bomb in the making”, he remarked, asking whether the finance minister considered this factor while devising the budget.

“We need to think of incentives to limit the population growth,” and the federal government should address the issue, he stressed.

He further said the government had failed to provide any relief to farmers in the budget.

“Please make this budget a budget for the people,” he implored.

The total volume of the federal budget for fiscal year 2021-22 is Rs 8.48 trillion with allocation of Rs2,135 billion under the Public Sector Development Programme (PSDP) – an increase of 37 per cent from last year’s development allocations.

Similarly, an amount of $ 1.1 billion is specified for vaccine procurement and Rs 66 billion for Higher Education Commission for education programs and Rs 44 billion under the development fund in the budget.

Later, the House was adjourned to meet again on Wednesday at 11:30 am. The House will further consider supplementary demands for grants following which the budget session will be prorogued sine die.