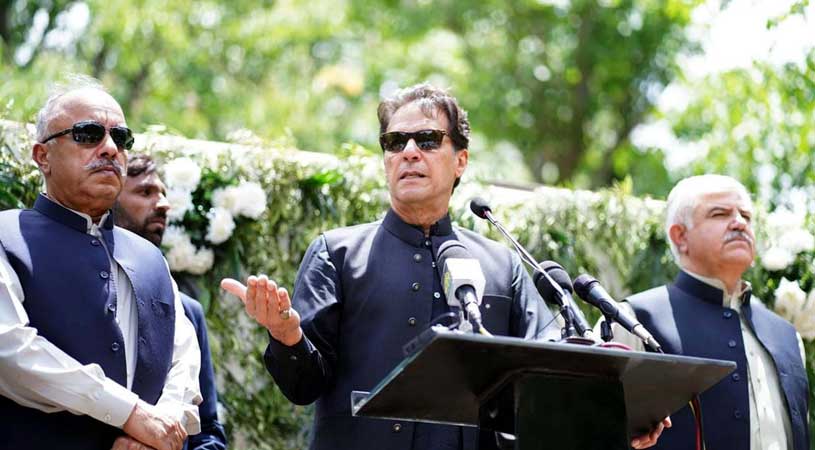 “A strict implementation of bylaws to ensure preservation of green cover and cleanliness of tourist spots can help Pakistan capitalize the true potential of tourism,” the prime minister said in his address to Tiger Force, the volunteer youth of Pakistan Tehreek-e-Insaf for community service.

The prime minister this afternoon arrived in Naran, a tourist destination of the Kaghan valley of Khyber Pakhtunkhwa, on a day-long trip to launch several tourism and environmental protection projects.

The projects included launch of emergency response service for tourists, tree plantation along the bank of Kunhar River besides breeding of Trout fish, distribution of 550,000 biodegradable bags, setting up a waste collection system and delivery of motorbikes to Community River Rangers.

Imran Khan said promotion of sustainable tourism through laws to check littering and damage to trees in areas with increased influx of visitors could secure the fragile ecosystem.

The prime minister said Allah Almighty had blessed Pakistan with a beautiful landscape with diversity ranging from plains to mountains and stressed that the best way to offer gratitude was to preserve the natural course of the environment.

“I have explored the world, but found no match with the scenic beauty of Pakistan,” he said. “The future generations will be grateful to us for a clean and green Pakistan.”

He said the government’s Clean and Green Pakistan initiative was about caring for nature and encouraging people to avoid littering the public places and protecting trees.

The prime minister expressed confidence that corrective measures in the tourism sector would bring a revolution towards generating revenue.

He mentioned that Switzerland, half the size of Pakistan’s northern areas, was earning $80 billion from the tourism sector compared with the latter’s total exports worth $25 billion.

However, with the right steps, Pakistan can tap the potential of tourism even more, he added.

He advised the residents and parliamentarians belonging to the Kaghan Valley to get engaged in maintaining cleanliness of their area to attract more tourists, which he said would be beneficial for the local economy.

The prime minister regretted that the trash was being thrown into the Kunhar River and urged the hotels to ensure proper waste disposal.

He lauded the efforts of Commissioner Hazara Riaz Khan for working out a strategy to protect eco-friendly tourism in the Kaghan Valley.

He directed strict compliance of bylaws to ensure cleanliness at tourist places and ensure stern action against the violators.

Talking to the media, the prime minister said ensuring law and order was inevitable for the promotion of tourism, complemented by development of infrastructure and facilities like resorts and recreational activities.

After eradication of terrorism, he said, the tourists influx had doubled in Pakistan.

He said mere construction of roads was not enough; rather tourism was a science and a component of different facilities.

He said the focus would be laid on both summer and tourism, to bring in revenue and create jobs.

He said under the newly introduced tourism integrated zones, the government would ensure implementation of bylaws to discourage haphazard construction.

The prime minister planted a Deodar tree along the bank of River Kunhar under a project for protection against erosion and silting. He also distributed motorbikes among the River Rangers who would patrol by the river to curb illegal fishing.

By releasing a grown Trout fish into the river, the prime minister inaugurated the Destination Trout Trophy in which the people would be allowed to catch fish but to release them immediately. The River Rangers would also guide the people on trout fishing.

As part of a project to replenish mature brown Trout in Kunhar River, around 30,000 grown trout would be released in the river.

Under the clean and green Pakistan initiative, the prime minister kicked off a drive to distribute around 550,000 biodegradable shopping bags among the community to protect the natural beauty of Kaghan Valley.

A Tourist Emergency Response Service to provide first aid and other emergency services to the tourists across the 170 kilometer stretch of Kaghan Valley was also inaugurated.

The prime minister handed over the garbage collection, disposal machinery as well as mechanical broom for cleanliness and beautification of the tourist city.

Earlier, in a briefing, Commissioner Hazara Division Riaz Khan told the prime minister that the area was rich with seven lakes located over 10,000 feet.

He said the government was strictly implementing building bylaws in Naran, introducing sanitation, waste management, placing dustbins and had imposed a ban on trout fishing in River Kunhar.

He mentioned that the future projects included revival or Karakorum Mountain Trek, Tulip plantation, introducing high-altitude marathon, establishment of fishing and aquatic school, besides a chairlift with its feasibility study in progress.

He also requested the prime minister for a Rs 200 million grant for Kaghan Development Authority and rehabilitation of Karakoram Highway and N-15 to ensure smooth incoming and outgoing traffic flow to tourist cities.

The projects launched by the prime minister aim at boosting the tourism sector and make it a strong pillar of the national economy.

Naran is a popular tourist spot of the Kaghan Valley with lush green hills and glaciers, leading to the spectacular Saif-ul-Maluk Lake at a height accessible through jeeps.