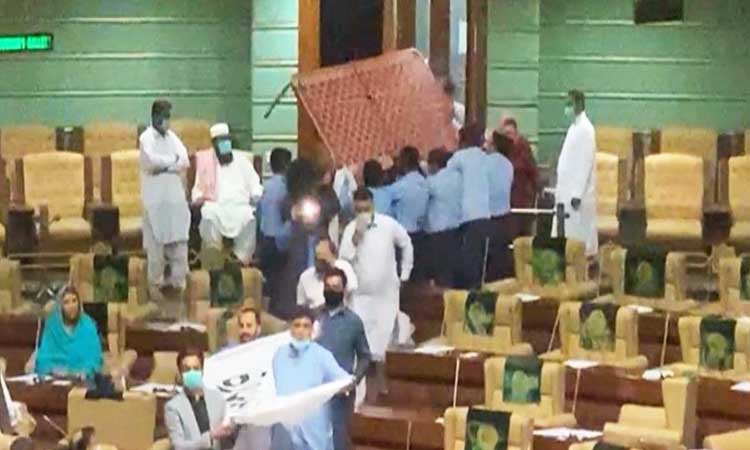 Pandemonium and melee defined the Sindh Assembly on Monday when opposition members — mainly from the Pakistan Tehreek-i-Insaf — disrupted proceedings after their leader was apparently denied permission to address the House.

The scuffle erupted when the opposition leader, Haleem Adil Sheikh, sought to speak first with the commencement of the proceedings, but Speaker Agha Siraj Durrani denied the permission, saying scheduled business would be carried out first and members would be allowed to speak on their points of order later.

Thile chair’s ruling prompted the opposition members to protest. Amid the sloganeering, some of the protesting members brought a “folding charpoy” into the House, symbolising it as the “funeral of democracy” and wanted to lay it before the speaker’s rostrum.

The opposition members shouted slogans of “Jamhoriyat ka janaza hai zara dhoom se nikle” (It is the funeral of democracy, should be taken out with fanfare) while trying to move the charpoy towards the speaker’s dais. After a struggle of a few minutes, however, their attempt was successfully resisted by sergeants at arms in the House.

Later, PTI’s Sheikh submitted a resolution in the assembly complaining that opposition members were being denied their right to speak in the House. He said it was a violation of the assembly rules to bar members from speaking.

Following the opposition’s protest, Information Minister Nasir Hussain Shah criticised the PTI and said their government in the Centre had burdened the poor with inflation.

Speaking about the incident, Adviser to the Sindh Chief Minister Murtaza Wahab condemned the opposition’s behaviour and alleged that they were trying to bring “container politics” into the Sindh Assembly.

“You will not find any example or precedent that someone tries to enter the assembly with a charpoy and the opposition leader is filming it. The people of Sindh should think whether they have sent the opposition leader to take pictures and film videos or present cut motions,” Wahab said while speaking to reporters.

Calling the incident “shameful”, he said no amount of condemnation would be enough for it. Poking fun at the opposition, Wahab said the PTI MPAs might have brought the charpoy because they were “suffering a lack of sleep at night” due to loadshedding in Karachi and constituents complaining about shortages of gas and electricity.

He said they were welcome to come and enjoy the air conditioner in the opposition leader’s office in the Sindh Assembly but “for God’s sake don’t establish such wrong and unfortunate traditions.”

“Will you feel good when you’re in government and other [political] parties do this? I think this is inappropriate and we are having to see this because these people are inappropriate.”

Wahab said the PPP and MQM-P might have had many differences but such incidents were never seen from them before. “I don’t know what kind of people they are and where they have come from that they’re trying to set such traditions in our assembly,” he said.

Hitting out at the PTI, he said the reason why it engaged in “politics of taunting and accusations” was that it could not tell what it had done for the nation and Sindh’s people. “These people are ‘selected’ not elected [and] that is why they have failed to highlight problems of Sindh’s people,” he alleged.

He stressed that the provincial assembly speaker was the custodian of the House and would be justified in initiating proceedings against anyone found responsible for besmirching its sanctity.

As the protests of the Opposition continued, the session was adjourned until June 19.