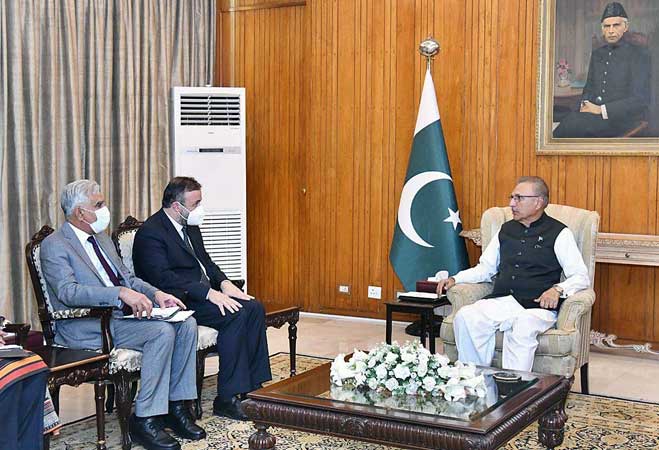 President Dr Arif Alvi has said that the government is focusing on women empowerment by providing them loans and equipping them with different skills to make them financially independent and stronger.

The president said this while talking to World Bank’s Country Director Najy Benhassine who called on him on Monday.

It is pertinent to mention here that the Board of Directors of the World Bank would take up Pakistan’s request for two budget support loans totalling $800 million in this week. Pakistan has recently met the conditions of the World Bank of enhancing monthly cash stipend of the Benazir Income Support Programme. According to the reports, the WB would consider two support loans including Human Investments to Foster Transformation (SHIFT-II) programme and the Programme for Affordable and Clean Energy (PACE).

Separately, President Alvi has urged Ulema to play their role in preaching the teachings of Islam on important social issues including women’s rights in inheritance.

Talking to a delegation of Ulema led by Chairman Central Ruet-e-Hilal Committee Maulana Abdul Khabir Azad on Monday, he said Islam is the first religion in giving women the right to inherit.

He said the Ulema should educate the people about the negative impacts of growing population and health issues. He said they should also work for social reform and promotion of moral values.

The president stressed to promote inter-faith and inter-religious harmony utilising masajid. He also paid tribute to Ulema for their contribution in creating awareness among the people on adhering to the standard operating procedures (SOPs) during the coronavirus pandemic.