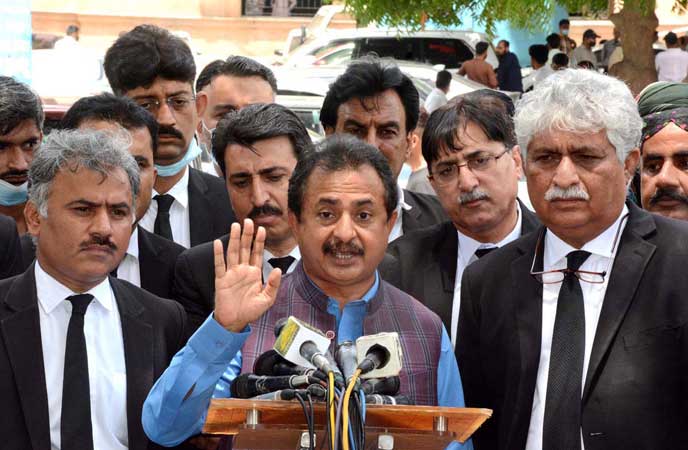 He in his petition claimed that Syed Murad Ali Shah was disqualified and barred from contesting the general elections by the Supreme Court of Pakistan on PS 73 Dadu district.

He said that despite the court verdict CM Murad participated in by-polls and emerged successful and soon after he was inducted in the Sindh cabinet as a Finance Minister.

Haleem Adil pleaded that he should be disqualified for his dual nationality and speaking lies before the courts under Articles of 62 and 63 of the Constitution of Pakistan since he had no more remained ‘Sadiq and Ameen’.

He said that he had filed the petition through lawyers including Advocate Abdul Wahab, Advocate Anwar Kamal, Advocate Mumtaz Gopang, Advocate Mohammad Asharraf Samoon, Advocate Ajmal Solangi and others.

While talking to media persons after filing the petition through his lawyers in SHC, he said that having found no way out to get rid of the corrupt and inefficient PPP rulers in Sindh, they opted to go to the court for the justice for the people of the province by getting such disqualified for dual nationality and speaking lies before the courts. .

He said that he had filed the application seeking the disqualification of Sindh Chief Minister by submitting the required documents, which could substantiate his dual nationality and the charge-sheet containing the serious allegations of the massive malpractices and the worse governance adding he said that they would produce more solid proofs so that courts might easily send corrupt rulers back home.

He said that PPP rulers in Sindh despite getting the huge amount of Rs 8,900 billion during the past 13 years had done nothing to mitigate the sufferings of the people, who according to him, were even deprived of the safe drinking water in all big cities, towns and villages of the province.

He said that they had decided to launch the decisive movement against the corrupt mafias operating in every department under the supervision of chief minister, cabinet members and the leaders of Pakistan Peoples Party adding he hoped that they would get justice from the courts and would manage to kick out such blood suckers.

The PTI leader said that, according to the report issued by auditor general Sindh, rulers in Sindh 44 per cent funds meant for the development schemes across the Sindh were embezzled and misappropriated, adding that he was optimistic that they would soon get rid of such corrupt and inefficient people.