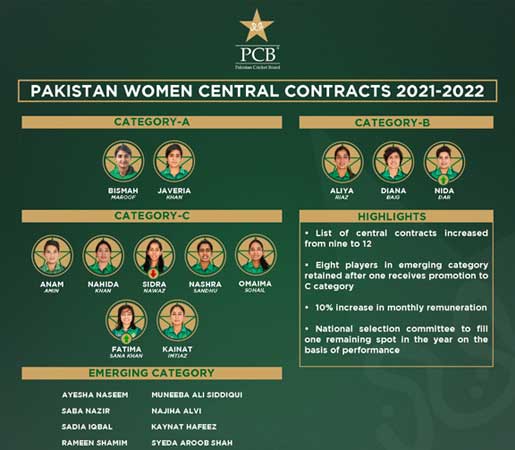 LAHORE: In its bid to continue to reward and incentivise top-performing women cricketers, the Pakistan Cricket Board has added three more spots in the central contracts for women cricketers for the 2021-22 season. These contracts, which come into effect from July 1, include 12 spots, divided between A, B and C categories, while eight cricketers have been retained in the emerging contracts list. In total, the PCB has awarded 20 contracts for the 2021-22 cricket season, which is two more than the previous. Monthly retainers across all rungs ––– including the emerging category ––– have been increased by 10 per cent and the national women’s selection committee has kept one spot open in the central contracts that will be awarded in the year based on on-field performance.

The central contracts have been awarded after factoring in the on-field performances in the past one year at both international and domestic level, and with an eye on the future engagements. The national women’s team host England for two T20Is and three ODIs in October, before they play ICC Women’s Cricket World Cup Qualifier in December and feature in ICC Women’s Cricket World Cup and Commonwealth Games next year. The national women’s side returned to action in January 2021 with the tour of South Africa for three ODIs and three T20Is after the Covid-19 pandemic had put a halt on the game around the world. They then played a 50-over fixture against Zimbabwe at Harare before the tour had to be cut-short because of the national team’s carrier’s decision to halt its flight operations in the region.

The 2020-21 season also saw the PCB organise National Triangular T20 Women’s Cricket Championship, a three-team competition, played at Pindi Cricket Stadium, Rawalpindi from 22 November till 1 December. All-rounder Nida Dar ––– who is the only batter to hit two half-centuries and is the second highest run-getter in the three ODIs Pakistan played against South Africa ––– has been promoted to category B from C. Fatima Sana, the recipient of PCB Women’s Emerging Cricketer of the Year Award last year, has been bumped up from the emerging list to category C of the central contracts. The 19-year-old emerged into a regular feature in Pakistan’s ODI line-up and played all three matches against South Africa in Durban earlier in the year.

She had an impressive outing in the domestic T20 competition as the right-arm pacer took four wickets in three matches at 21.25 run per dismissal and remained unbeaten in three innings as she accumulated 95 runs with her highest score being 41 not out. Kainat Imtiaz, who was the player of the tournament for scoring 111 runs at the average of 111 in four innings and taking three wickets, has also been given a category C contract. The 29-year-old remained the top run-getter in T20Is for Pakistan as she scored 79 runs at 26.33 and a strike-rate of over run-a-ball (101.28).

Left-arm orthodox Nashra Sandhu has also been handed a category C contract after she finished the season as Pakistan’s second best ODI bowler with six scalps – behind Diana Baig’s nine wickets in three innings – at an average of 16.66 and economy rate of 3.44. Javeria Khan, who captained Pakistan in Africa and will continue leading the national side in the three T20Is and five ODIs against West Indies in Antigua, is retained in the top category. She is joined by Bismah Maroof, who is on a maternity leave as per the recently announced PCB’s Parental Support Policy All eight cricketers who received emerging contracts last year have been retained in the category. Meanwhile, wicketkeeper Sidra Nawaz has been demoted to category C from B.

Urooj Mumtaz, the chair of the national women’s selection committee, said: “I want to take this opportunity to congratulate all the players who have received central contracts for the 2021-22 season. The Pakistan Cricket Board has increased the list of central contracts from nine to 12 as it continues to value and reward the best performers on the circuit. The emerging category retains eight players after Fatima Sana, who has shown some outstanding on-field performances and promise, has been awarded category C contract. Over the next year, the PCB, in total, will contract 20 women cricketers, which is an increase of two from the 2020-21 season. To ensure that the players who have not earned central contracts stay motivated, we have announced an open spot in the central contracts to be awarded to one player for outstanding performances during the year. I am sure this will act as an incentive for the players, who are gearing up for what promises to be an exciting series against West Indies in Antigua.”