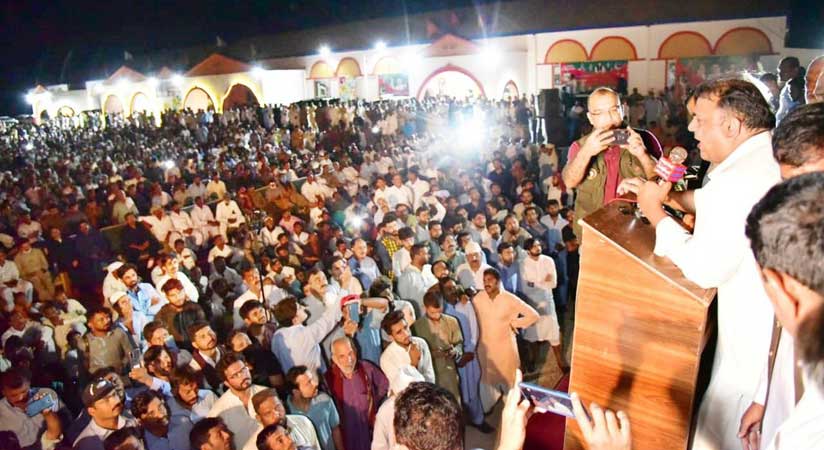 Federal Minister for Information and Broadcasting Fawad Chaudhry on Sunday took a dig at Pakistan Peoples Party (PPP) Chairman Bilawal Bhutto Zardari, saying that “it seems he is unaware of his party’s position” in Azad Jammu and Kashmir (AJK).

His remarks followed a statement by Bilawal who said that it will be his party that will form the next government in AJK.

“In GB (Gilgit-Baltistan), Bilawal and Maryam screamed at the top of their lungs during election campaigns and later it was discovered that not even a third of their candidates were in the running for elections,” said the minister.

He went on to state that in Kashmir, PPP has eight candidates contesting elections. “From Bilawal’s conversation, it seems he is unaware of his party’s position,” he said.

Bilawal is in Kotli to muster support and galvanise PPP voters ahead of the 11th General Elections of Azad Jammu and Kashmir.

Meanwhile, talking to a private television channel, Fawad said that it was a “slip of the tongue” when Prime Minister Imran Khan called slain al-Qaeda chief Osama bin Laden a martyr.

He said Pakistan considers Osama Bin Laden a militant and the al-Qaeda as a terrorist outfit. “Pakistan has voted in the UN on the War on Terror [against militants], we are a voter on a [UN] list that declared Osama bin Laden and al-Qaeda terrorists,” he said.

“Pakistan has sacrificed the most in the war against terrorism,” Chaudhry added.

Last June, during an address to the National Assembly, the prime minister had recalled how the Americans had conducted an operation in Abbottabad and “killed Osama Bin Laden — martyred him”.

Foreign Minister Shah Mahmood Qureshi, most recently, in an interview with TOLO News journalist Lotfullah Najafizada, was asked to comment on the prime minister’s remarks in parliament. He said that the remarks were taken “out of context”.

“He [PM Imran Khan] was quoted out of context. And, you know, a particular section of the media played it up,” he added.

“I will let that pass,” responded Qureshi, after a brief pause.

When asked to comment on why the foreign minister hesitated in answering a question on the premier’s statement on bin Laden, the information minister said Qureshi may have wanted to put the issue behind him and move forward.