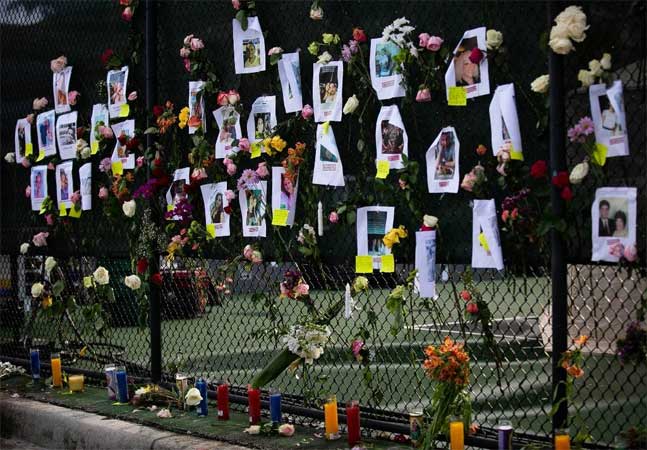 The scores of people missing in the collapse of the beachfront condo building in Florida are no longer just a dry number but have names and faces thanks to a makeshift memorial erected nearby.

On a chain link fence at a site serving as a staging ground for rescue teams and equipment, photos of some of the missing illustrate the desperation of their loved ones, waiting for news after the sudden and still unexplained tragedy in the wee hours of Thursday.

Behind the fence, a block away, smoke drifts up from the rubble of the Champlain Tower South building, half of which fell like a house of cards, while cranes and other heavy machinery groan with the work of moving concrete and steel rubble.

As of Saturday night, five people are confirmed dead and 156 who may have been in the building when it came tumbling down in the middle of the night in this beach town near Miami are unaccounted for.

One photo on the fence shows a father and his adolescent son — Alfredo, in glasses and bearded, and young Lorenzo — with the word “MISSING” and this note: “A family friend tells me they were in unit 512.”

Other photos show an older couple seated at a restaurant, a young man in suit and bow tie, and a couple standing on a beach — identified as Ilan Naibryf and Deborah Berezdivin.

Passages from the Bible are written on Post-its attached to some of the pictures.

Beside the photos, well-wishers have stuck flowers in the fence and set candles on the ground.

“You can see the smoke off in the distance, and here the faces of the missing. Now they are unforgettable,” said Olivia Ostrow, a French woman who has lived in Surfside for 20 years.

“These parents, these children. They are people just like us,” Ostrow told AFP, her eyes filling with tears.

Gina Berlin, who has lived in the neighborhood for nearly 30 years, said she came to the memorial to pray for the missing.

“I am still in shock,” said the 54-year-old, who has two friends who live in the part of the building that remained standing and were able to get out safely.