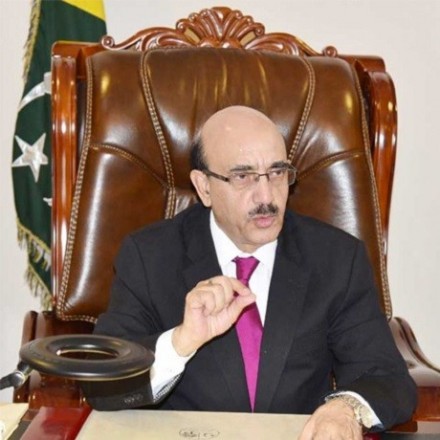 MIRPUR (AJK): While holding Sheikh Abdullah and Mufti Saeed families of Indian Illegally Occupied Jammu and Kashmir responsible for Kashmiri peoples’ unending afflictions, AJK President Sardar Masood Khan said that these loyalists were serving the Indian interests and playing the role of facilitators to help India consolidate its illegal occupation of Kashmir since 1947. “Kashmiri people would no longer fall into their traps because Kashmiris are now more conscious about their treacheries and they know that these families had been in power and facilitated the massacres of thousands of Kashmiri people in 1947, 1948, 2010 and 2015-16”, he recounted.

The AJK President made these remarks while addressing a ceremony held to launch a report on “Illegal Transfer of Population to Illegally Occupied Jammu and Kashmir and International Law” organized by the Center for Law and Security at Jammu Kashmir House in the federal metropolis on Sunday.

He said that those who shook hands with Modi, a killer of Kashmiris and the Muslims of Gujrat, were traitors in the eyes of Kashmiris before, and even today the stain of betrayal is visible on their foreheads which they cannot hide.

The AJK President said that the Kashmiri people had rejected the drama staged by Farooq Abdullah, Omar Abdullah, Mehbooba Mufti, and other such politicians in Delhi. He said that the participation of the genuine Kashmiri leaders Syed Ali Gilani, Mirwaiz Omar Farooq, Yasin Malik, Asiya Andrabi, and Shabbir Ahmed Shah would have established the credibility of these talks and the sincerity of rulers in Delhi but their absence shows that Kashmiris have nothing to do with this pointless exercise.

He alleged that the Modi regime intended to hold fresh delimitation to turn the majority of Muslim members into a minority in the state assembly of occupied Kashmir and to divide the constituencies of the Muslim majority is a plan to block the way of Muslim representatives to the state legislature.

“This time, again Indian rulers have chosen the descendants of Abdullahs and Muftis to get their thumb impressions for implementation of a nefarious plan against the people of Kashmir. He went on to say that Indian authorities already had transferred more than four million Hindu citizens from different parts of India and settled in Muslim majority areas of Jammu.

Noting that Indian occupation forces were engaged in committing crimes that include crimes against humanity, genocide, ethnic cleansing, and war crimes, President Khan said the report prepared by the Center for Law and Security would fill the vacuum in law-fare in relation to Kashmir.

He said that it had now become crucial to consider the legal aspects of the Kashmir case because actions taken by Indian in IOJK are serious crimes under the international law and these violate article 02 of the Genocide Convention of 1948, article 37 and 59 of the fourth Geneva Convention, Additional Protocol 01 and the statutes of the International Criminal Court (ICC).

“If various resolutions of the UN Security Council and the UN reports on the illegal transfer of population are kept in view, India becomes criminals under the international law,” he said and added that a strong case against India was needed to be framed and the organizations like the Center for Law and Security could play an important role in this regard.