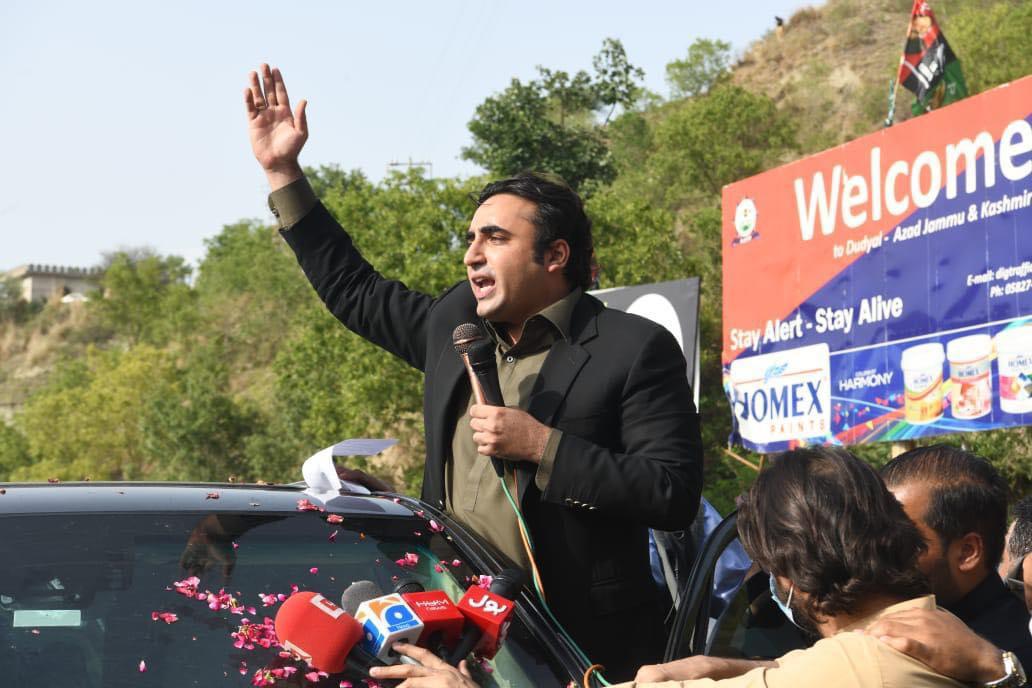 Pakistan Peoples Party (PPP) Chairman Bilawal Bhutto Zardari on Sunday said that, While people in occupied Kashmir saw atrocities at the hands of Indian soldiers, residents in Azad Jammu and Kashmir (AJK) faced the highest inflation in the country as a result of the PTI government’s policies.

Addressing a gathering at Hajeera in Azad Jammu and Kashmir, Bilawal said that people of Kashmir, and not what he called a ‘puppet’ Prime Minister Imran Khan sitting in Islamabad, would take decisions on Kashmir. “It is PPP’s slogan that plebiscite is the only solution to the Kashmir issue,” he added.

“Now you want to get votes from the people of AJK after giving ‘NRO’ to an Indian spy,” he said, and added, “Let’s see whether Kashmiris give you votes or not.”

He recalled that following the abrogation of Article 370 of its constitution by India on August 5, 2019, which had granted limited autonomy to occupied Kashmir, the ‘puppet’ prime minister had said in the National Assembly that what he could do in such a situation while the entire world had condemned this action by the Indian government.

PPP chairman expressed the resolve not to leave Kashmiris alone. “PPP’s affiliation with the people of Kashmir spreads over three generations,” he said, and added, “Party founder and former prime minister Zulfikar Ali Bhutto (ZAB) had said that Pakistan would fight for Kashmir for thousand years.”

He said if people of AJK supported him, no power on earth could stop PPP from coming to power.

Bilawal said it was ZAB who had given Pakistan nuclear programme while it was his daughter, former prime minister Benazir Bhutto who had laid the foundation of the country’s missile programme.

He alleged that PM Imran had become a ‘security risk’ now. “People of AJK will give loud and clear message on July 25 (election day) that they have rejected the ‘puppet’ government installed in Islamabad,” he claimed.

PPP chairman said it was the PPP government which had launched Benazir Income Support Programme (BISP) under which poor women were supported financially. “It was our government which had raised the salaries and pensions of government employees by 100 per cent; something Pakistan Muslim League-Nawaz government did not do when it came to power in 2013,” he boasted.

Prior to that, Bilawal visited the shrines of Kashmir Baji Mian Alif Din and Baji Mian Muhammad Qasim in Rahian Sharif where paid his respects and prayed for Kashmir’s freedom and the country’s integrity.