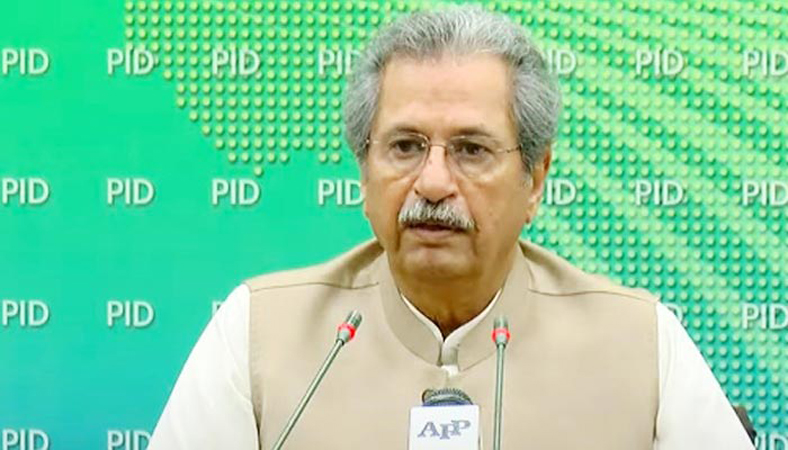 ISLAMABAD: The federal government has allocated funds amounting to Rs 28 billion for education sector in the budget 2021-22, which stand almost 500 percent higher than the PML-N’s last year allocation.

In an Interview with APP on Sunday, Federal Minister for Education and Porfessional Training, Shafqat Mehmood said that through this allocation, the education would see a true transformation.

He said that as far renovation of ICT schools was concerned,a flagship project amounting to Rs. 6.9 billion had been approved by CDWP for 180 educational institutions.

PML-N, Shafqat said, had allocated Rs 80 billion for higher education in its last year, whereas the PTI government kept Rs 124 billion for the universities.

Similarly, recurring and development grants of PML-N stood Rs 64 billion and Rs 18 billion respectively in its last year, while the incumbent government allocated Rs 81 billion and Rs 42.5 billion in this budget respectively, he mentioned.

He went on saying that when the PTI government came into power as many as 177 degree awarding universities and institutions were operating in the country, and now the number had reached 230.

During the PTI government tenure, the enrollment in educational institutions had increased by 45 percent; 32 percent increase in number of students benefiting from financial aid programmes, 111 percent increase in fully funded scholarships for FATA & Balochistan, the minister said.

“The budget allocation and spending of HEC has increased to facilitate areas of access, quality, research and governance. This enhancement will make HEC easier to fund universities which were in dire straits last year” Shafqat said.

He said the largest ever intervention by the incumbent government to revamp the entire sector and allocated 10 billion rupees for training of 170,000 students to make them skillful citizens. More than 30,000 students have been skilled in first batch despite Covid-19 restrictions while 43,000 youth are enrolled in training classes. More than 850 training institutes are engaged across the country for imparting the training in both high-tech and conventional technologies.

For the first time, NAVTTC took the initiative of establishing job placement centres and extended existing National Skill Information System into National Employment Exchange Tool ( NEXT) to bridge the demand and supply gap of skilled workforce in local as well as international job market with dedicated resources which are now linking Pakistani skilled workforce with employers in both national and international job markets, he remarked.

A pilot project for blended E-learning in 200 classrooms in 60 schools ( urban & rural) of federal capital for grades 6-12 had been launched in partnership with Tele Taleem, Knowledge Platform and PTCL, he added.

Pilot project for STEM teaching in grade 9-12 launched in 30 schools ( urban & rural) in partnership with Robotmea Edutech pvt Ltd. Technical education is being introduced at matriculation level and technical labs are being established in ICT, GB and AJK.
To integrate TVET and formal education and further develop stem learning Matric-Tech scheme being launched on pilot basis in 15 selected schools of ICT, GB and AJK under which students in matric will be offered a 3rd stream in the shape of Matric-Tech where alongwith compulsory subjects, they would also be imparted hands-on technical skills in latest technologies, he concluded.