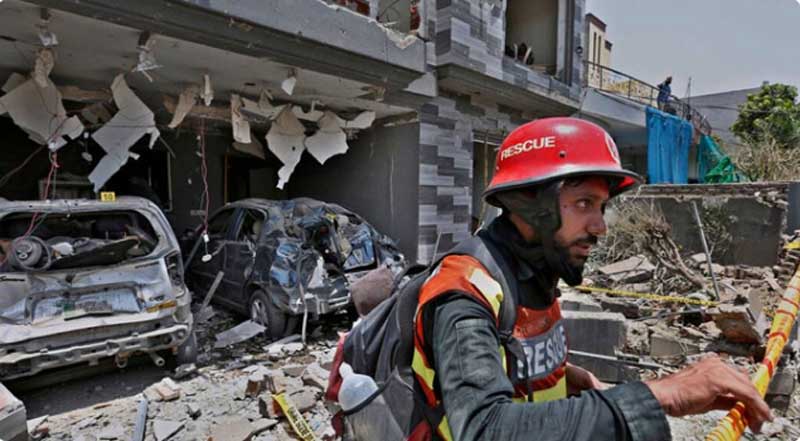 A woman ‘facilitator’ as well as a car mechanic was taken into custody for suspected involvement in a blast that rocked Lahore’s Johar Town a few days back.

Reports said intelligence agencies have arrested the mechanic for modifying the interior of the car that was used in the blast. “He has been shifted to an unknown location,” they added. However, the person who had left the car at the location where the explosion had occurred is yet to be arrested.

Police also claimed on Saturday that has arrested a woman facilitator of Johar Town blast. According to police, Kiran was apprehended on information provided by suspect Peter Paul David, who is already in police custody. Police said Peter Paul used to stay at a private hotel in the provincial capital’s Rewaz Garden area, where Kiran would also stay with him. The police has taken CCTV footage and record of the hotel into custody. Employees of the hotel are also being interrogated. A police official said all the arrests had been made on the basis of information provided by Peter Paul.

The investigation revealed that Peter Paul David had visited Lahore three times in the last one-and-a-half month and stayed there for a total of 27 days. The agencies obtained his immigration data and found evidence that he met several people during his stay. The car used in the blast was also registered to David.

David runs a scrap and hotel business in Bahrain and moved his family from the Middle-East to Pakistan in 2010, sources said, adding that he had arrived in the country a month-and-a-half ago, during which he went to Lahore three times.

Reports also emerged that the LEAs have expanded the scope of investigation into the Johar Town blast and suggested placing the provincial capital and Islamabad on high alert after initial reports suspected a ‘foreign hand’ behind the terrorist activity.

The prime suspect, the car driver, is still at large. When the investigators tracked his footsteps, they found that he rode a white car after parking the car at the blast site. Unfortunately, the CTD could not find the driver’s escape route or the vehicle he used. Two teams of the CTD, one was chasing for evidences with the angle that he used local transport to escape from the provincial metropolis and the other focusing on use of private vehicle. The CTD also grilled the officials that had checked the vehicle at Babu Sabu entrance of the metropolis.

The suspected driver had a dialogue with the officials for at least nine minutes. When the officials asked him to open the backside of the vehicle, he said that exterior lock was not working and his car was tampered. The official belonged to Anti Vehicle Lifting Staff (AVLS). He said that he checked the documents and let him go when satisfied.

The investigator also said that the movement of the car was tracked and the time lapsed analysis from entrance at Babu Sabu to the blast site, suggested that there was not enough time to install explosives after entering the city. He also added that the explosives were installed near the engine of the vehicle as it was the worst damaged part of the four-wheeler. Installation there was tricky and complicated and took time.