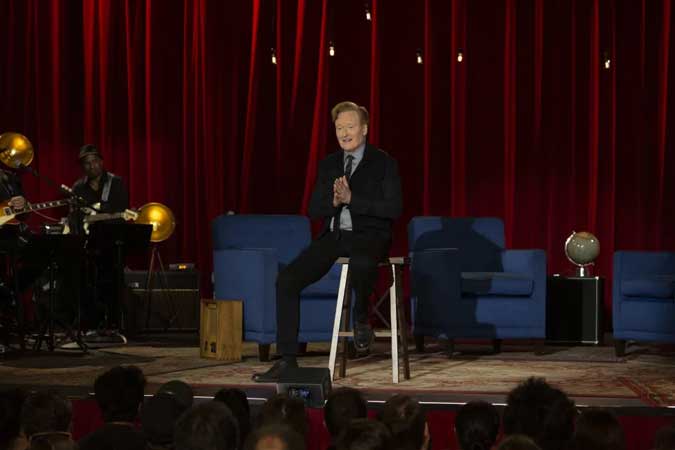 Conan O’Brien has brought the curtain down on his 28-year career in late-night TV.

The US comedian and TV host, 58, has fronted three different shows since 1993 and is leaving network TBS after more than a decade of Conan.

Known for his distinctive ginger quiff, O’Brien, who is of Irish descent, told viewers he has appeared in more than 4,000 hours of TV during his career.

His final episode opened with a Simpsons sketch, featuring Homer conducting an exit interview with an animated O’Brien.

In his farewell speech, O’Brien paid tribute to his long-time sidekick, Andy Richter, and his executive producer Jeff Ross.

He thanked his wife, Liza, who was in the audience, before signing off from late-night TV for good.

He said: “I have devoted all of my adult life, all of it, to pursuing this strange phantom intersection between smart and stupid.

“And there’s a lot of people that believe the two cannot co-exist, but God, I will tell you, it’s something I believe religiously.

“I think when smart and stupid come together – it’s very difficult – but if you can make it happen I think that it’s the most beautiful thing in the world.”

O’Brien told of his gratitude to his fans and the staff he has worked with before sharing a final piece of advice with the audience.

Earlier in the episode, Hollywood comedian and actor Will Ferrell appeared over Zoom from Boston, where he is shooting a film.

“I wanted to wish you all the best as you end an incredible run on Conan, I’m truly excited to see what comes next,” Ferrell told O’Brien.

Ferrell, who has appeared in the farewell episodes of previous Conan shows, jokingly filmed multiple goodbye messages for any future iterations.

The episode, filmed in front of a live studio audience in Los Angeles, featured flashbacks to some of O’Brien’s favourite celebrity interviews, comedy sketches and trips abroad from his travel show.

Actor and comedian Jack Black was the final celebrity guest but used a walking stick and had his right foot in a protective boot after injuring himself rehearsing a musical number for the show.

While he was unable to perform the lively number planned, the School Of Rock star did deliver a special cover version of Frank Sinatra’s My Way in tribute to O’Brien.

Black said he will always “worship” the host, who in 2000 was the first late night presenter to interview him.

O’Brien’s CV included writing jobs on Saturday Night Live and The Simpsons when NBC plucked him from relative obscurity to take over from David Letterman on Late Night in 1993.

He remained in post until 2009, when he moved to the Tonight Show.

Infamously, O’Brien left NBC following one of the most high-profile spats in US TV history.

The network failed to manage the transition from Leno to O’Brien, leaving both men unhappy.

O’Brien, whom the American public overwhelmingly backed in the row, departed in 2010 with what was reported to be an eight-figure sum. He had fronted Conan on TBS since.

The host, who earlier this week smoked cannabis on air with the actor Seth Rogen, will next front a show for the HBO Max streaming service.