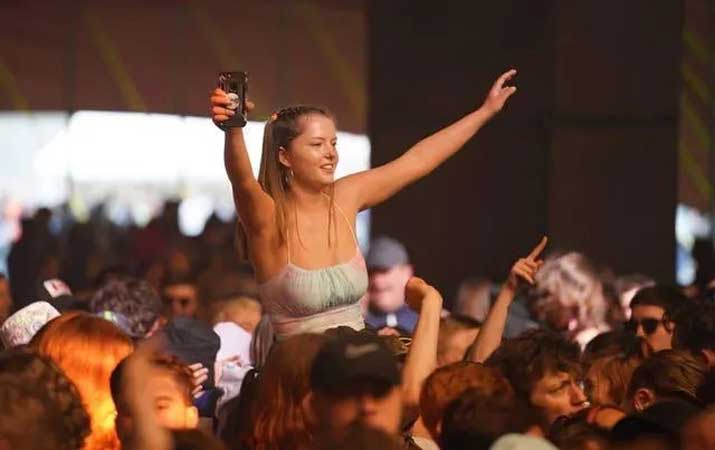 The Brit Awards, which featured an audience of 3,532, recorded zero cases of coronavirus as part of the Government’s live events pilot scheme.

The ceremony on May 11 marked the return of live music to London’s O2 Arena after more than a year, and the first large-scale indoor music event of 2021.

Dua Lipa, Sir Elton John and Rag’n’Bone Man were among those who performed to the 35% capacity crowd, who were not required to wear masks or social distance while at their seats. The Department for Digital, Culture, Media and Sport (DCMS) has published the results from the first phase of its events research programme (ERP) the day after Andrew Lloyd Webber and others in the entertainment industries launched legal action to force the Government to make its findings public. Event organisers had expected the results of the programme, which has run test events at sporting, music and arts venues to assess the safety of large gatherings during the pandemic, to be published last week, but the date was pushed back.

The report confirms 28 cases of Covid-19 were recorded during the ERP’s first nine events – which featured 58,000 attendees and included the Carabao Cup Final and FA Cup Final. Of those 28 cases, 11 were identified as being potentially infectious at an event, while a further 17 were potentially infected at or around the time of an event.

A 6,100-capacity music festival in Liverpool’s Sefton Park on May 2 saw two cases, while the Circus nightclub, which hosted nearly 7,000 people over two nights on April 30 and May 1, logged 10 cases.

Outbreak prevention controls around the Circus nightclub worked well, the DCMS said, and the event was pre-emptively flagged by public health teams as having increased transmission risks.

The report concluded that both indoor and outdoor events carry a risk of transmission but that “pinch points” where attendees may congregate carry greater risk.

Attendees needed a negative lateral flow test to gain access to the events and were also asked to take a voluntary pre and post-event PCR test. It comes after the organisers of Latitude festival in Henham Park, near Southwold, Suffolk, announced it would be taking place as part of the ERP.

The four-day event is due to be held from July 22 to 25 – starting three days after the Government hopes to end all lockdown measures – with headliners including Wolf Alice, The Chemical Brothers, Bastille and Bombay Bicycle Club. Festival Republic, who also operated the Sefton Park and Download Festival pilot events, said it would work with scientists and the director of public health in Suffolk on measures that will allow the festival to operate safely.

Culture Secretary Oliver Dowden said: “Our innovative and science-led Events Research Programme is helping us to better understand how the risk of transmission at major events can be effectively mitigated.

“The findings and learnings will help event organisers plan for large audiences as we move to Step 4 of the road map.