Envoy reaches out to community; discusses multifaceted cooperation with UK 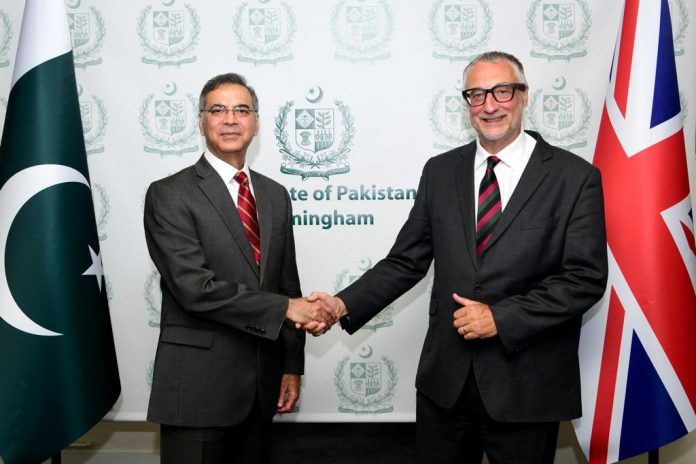 ISLAMABAD: Pakistan’s High Commissioner Moazzam Ahmad Khan is currently visiting Birmingham and Wales as part of his efforts to reach out to the community and explore avenues of multifaceted cooperation between Pakistan and the UK.

In his virtual meeting with the Mayor of West Midland Combined Authority Andy Street, the high commissioner discussed issues of mutual interest including those relating to Pakistani diaspora.

While appreciating the close association of the mayor with Pakistani diaspora in the West Midlands, the high commissioner underscored the importance of further strengthening the bond through more avenues in the post COVID-19 period. He also extended an invitation to the mayor for a visit to Pakistan.

In his talk with MP Khalid Mehmood and Mike Olley, Executive Director of Westside Business Improvement District (BID), the envoy discussed possibilities of further fortifying the strong multifaceted relations between the two countries.

He noted that the presence of a large Pakistani diaspora provided a strong base for special and strong bilateral relations. He also spoke on matters of business improvement with the executive director.

In his interaction with Lord Mayor of Birmingham Muhammad Afzal, local councillors and CEO of Edgbaston stadium Stuart Cain, the high commissioner discussed matters pertaining to youth, tourism and trade.

While highlighting Pakistan’s improved ranking in terms of ease of doing business, the existence of a huge market of 222 million people with large middle class, availability of English speaking economical skilled labour and business friendly legislative framework, the high commissioner called upon the interlocutors to invest in and trade with Pakistan.