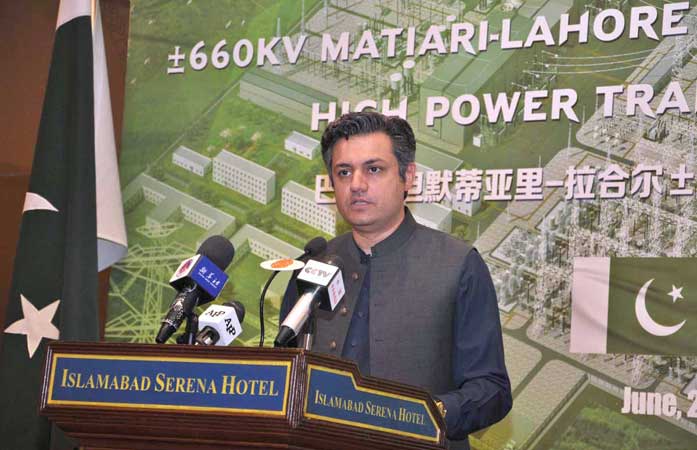 Addressing at virtual inauguration of high-power Testing of ± 660kV Matiari-Lahore HVDC Transmission Line project being witnessed simultaneously in Pakistan and China here Friday, the minister said CPEC was of utmost importance for Pakistan as it would enable the country to enhance industrial production, upgrade energy and communication infrastructure and improve connectivity within the region.

The CPEC has generated a number of employment and investment opportunities in Pakistan and beyond, he said.

The minister said the government was committed to providing basic necessities to the masses through its power projects.

The government has performed well in the last 3 years and it has attained various projects on different fronts, he said.

Hammad said the government has also worked to improve the electricity transmission system in the country and a record 24,633 MW power was transmitted in the current month through its national power system.

He appreciated the hard work of NTDC Management, PPIB, PMLTC and State Grid Corporation of China for making the project a huge success.

He said the friendship between Pakistan and China spanned over seven decades and started in 1951 when the first high level official delegation visited China.

“We have also celebrated the 70th anniversary of diplomatic ties between China and Pakistan recently. The friendship between the two countries is expanded in different sectors like education, power sector, tourism, trade, defense, health along with CPEC projects,” he observed.

The transmission line would evacuate power from power plants located in Sindh to the North load centers. Thus, bringing stability in the power system and enhancing the transmission capability to overcome the power crisis in Pakistan. He said the project was continued despite the pandemic and was successfully completed. The project would bring relief to the consumers, he said.

He also expressed sincere gratitude to the Ministry of Energy , CPEC Authority,NEPRA and China National Energy Administration for the unremitting support and convenience provided.

He said over 1,300 Chinese engineers and technicians along with 6500 Pakistani workers overcame the impact of the pandemic and intensively worked together. They successfully implemented low-power test and High-power test, and smoothly made it into the new phase of High-power trial run operation in spite of the difficulties and obstacles, presenting us a good interpretation of China speed in Pakistan, the ambassador said.

He said up to now, CPEC has attained $25.4 billion investment in Pakistan, which increases for Pakistan as much as 5,200 MW of installed power generation capacity, 886,000 meters of national power transmission line, 510 kilometers of highway, and 75,000 jobs created while in the peak time of construction.

He said, “ due to its tremendous contributions to Pakistan’s economic and social development, CPEC gains widespread praise from the whole society of Pakistan and attracts extensive attention from the international community as well”.

He said at present, CPEC moved up to the new phase of high quality development, focusing on industry, agriculture and livelihood cooperation.

“As we know, a stable power supply is the foundation of industrialization and industrial cooperation. For that purpose, the project, under the strong guidance and leadership of China National Energy Administration and State Grid, is supposed to be well operated and maintained, functioning as the main artery to transmit the power from south to north, and be gradually adapted to localization” he said.

He expressed the hope the Matiari-Lahore Transmission Company could make further study with the Pakistani counterpart on how to deepen and expand the power transmission corporation to meet the demand of the local economy and community, making more contribution to the high quality development of CPEC.

He said the year of 2021 marked the 70th anniversary of the establishment of diplomatic relations between China and Pakistan. Over the past 70 years, no matter how the international landscape, regional situation and domestic situation of the two countries changed, the two sides have always trusted and supported each other, and the bilateral relationship has become a model with different social systems, different historic background, he said.

The Ambassador said China was willing to work closely with Pakistan to well implement the consensus reached by leaders of two countries, and continuously advance the progress of CPEC, enriching the all-weather strategic partnership and building a closer China-Pakistan community with a shared future in a new era.

Speaking on the occasion, MD NTDC Muhammad Ayub said low testing of the transmission line had already been conducted during which 800 MW and 2200 MW electricity was successfully transmitted.

He said it was a great achievement for both China and Pakistan and the project would bring stability in the transmission system. He said the commercial date of operation of the project was September 1, 2021.