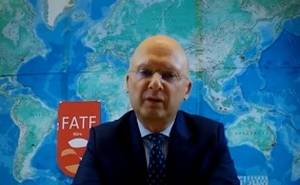 The Financial Action Task Force has praised Pakistan’s progress and attempts to resolve issues in its country action plan linked to countering terrorist funding, encouraging it to keep moving forward and handle “the one remaining CFT-related item” as soon as feasible.

“The Pakistani government has made significant progress in strengthening and improving its counter-terrorist financing mechanisms. “It has mostly completed 26 of the 27 things on the action plan it originally committed to in June 2018,” he said.

He said that the one key action item still needs to be completed “which concerns the investigation and prosecution of senior leaders and commanders of UN designated terror groups”.

In a statement issued after the meeting, the FATF said that since June 2018, when Pakistan made a high-level political commitment to work with the FATF and APG to strengthen its AML/CFT regime and to address its strategic counter-terrorist financing-related deficiencies, “Pakistan’s continued political commitment has led to significant progress across a comprehensive CFT action plan”.

“The FATF recognises Pakistan’s progress and efforts to address these CFT action plan items and notes that since February 2021, Pakistan has made progress to complete two of the three remaining action items on demonstrating that effective, proportionate and dissuasive sanctions are imposed for TF (terror financing) convictions and that Pakistan’s targeted financial sanctions regime was being used effectively to targeted terrorist assets,” the statement read.

FATF noted that Pakistan has now completed 26 of the 27 action items in its 2018 action plan.

“The FATF encourages Pakistan to continue to make progress to address as soon as possible the one remaining CFT-related item by demonstrating that TF (terror financing) investigations and prosecutions target senior leaders and commanders of UN designated terrorist groups,” said the statement.

According to the anti-money laundering watchdog, in response to additional deficiences later identified in Pakistan’s 2019 APG Mutual Evaluation Report (MER), “Pakistan has made progress to address a number of the recommended actions […] and provided further high-level commitment in June 2021 to address these strategic deficiencies pursuant to a new action plan that primarily focuses on combating money laundering”.

The FATF outlined six areas where Pakistan should continue to work to address its strategically important AML/CFT deficiencies:

(2) demonstrating that assistance is being sought from foreign countries in implementing UNSCR 1373 designations;

(3) demonstrating that supervisors are conducting both on-site and off-site supervision commensurate with specific risks associated with DNFBPs, including applying appropriate sanctions where necessary;

(4) demonstrating that proportionate and dissuasive sanctions are applied consistently to all legal persons and legal arrangements for non-compliance with beneficial ownership requirements;

(5) demonstrating an increase in ML investigations and prosecutions and that proceeds of crime continue to be restrained and confiscated in line with Pakistan’s risk profile, including working with foreign counterparts to trace, freeze, and confiscate assets; and

(6) demonstrating that DNFBPs are being monitored for compliance with proliferation financing requirements and that sanctions are being imposed for non-compliance.

Pakistan was hopeful that compliance in 26 out of 27 conditions in the Country Action Plan would provide sufficient grounds for its exit from the Task Force’s grey list.

The matter, however, was never so simple. There are complicated categories which determine a country’s compliance and real progress.

The fear or possibility that Pakistan would not be given a clean chit in the FATF plenary meeting was already there, given past outcomes.

This is because there is another process that goes alongside the FATF’s country action plan, and this is the Asia Pacific Group plan, which has its own 40 conditions Pakistan has to meet.

APG is an affiliate of the FATF. It is a regional group that acts as a bridge between FATF and Pakistan because Pakistan is not a member of FATF. The total number of FATF members is 39. There are 37 countries besides organisations of regional cooperation, including the European Commission and the Gulf Cooperation Council.

The FATF relies on its network of regional groups and these groups forward the case of that country to the FATF based on the technical assessment of a country and the International Co-operation Review Group, in light of the recommendations of the regional group, evaluates a country’s performance.

Since 2018, when Pakistan was put on the grey list, this group has been giving its input in Pakistan’s Mutual Evaluation report.

On the recommendations of this group, Pakistan has remained on the grey list for the last three years.

However, now the Asia Pacific Group has also confirmed that Pakistan has complied with 30 of its own 40 conditions. And with this latest development, the path out seems in sight.

A day earlier, Foreign Minister Shah Mahmood Qureshi claimed there was no longer any need to put Pakistan on the grey list because the nation has completed 26 of the FATF’s 27 action items.

Qureshi has accused India of attempting to exploit the conference for political reasons, claiming that New Delhi has been spreading anti-Pakistan propaganda for years.

He stated, “Pakistan has made serious efforts to combat money laundering and terrorist financing.”

He had stated that Pakistan “inherited” the FATF grey-listing problem from the previous administration, but that the current government has worked hard to get the country out of it.

The world was appreciating Pakistan’s efforts in implementing the FATF Action Plan, according to the foreign minister.

Pakistan will stay on the grey list until June, according to the FATF, which says the nation is under “enhanced scrutiny” when it comes to terror funding.

While the FATF recognises Pakistan’s counterterrorism achievements, President Dr Marcus Pleyer stated that the country still has some major flaws that need to be addressed.

“Three of the action plan’s 27 conditions have yet to be addressed,” he had stated. “I applaud Pakistan’s efforts, and three of the six duties it had to fulfil had been completed, but the other three in terms of terror funding require significant attention.”