PM for ‘just’ distribution of funds by Sindh government 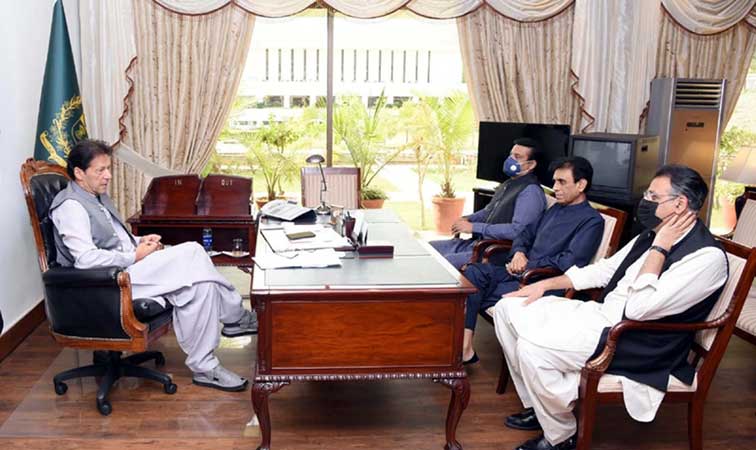 The prime minister, in a meeting with the parliamentarians of Muttahida Qaumi Movement (MOM), said the government is taking all-out measures to resolve the issue faced by the Karachi residents.

The prime minister said the early completion of federal government projects in Karachi and early launch of newly announced works are among government’s priorities.

Meanwhile, Prime Minister Imran Khan has said the government is making earnest efforts to make Pakistan a polio-free country despite the challenges in the wake of Covid-19 crisis. In a telephonic conversation with Bill Gates, Co-Chair of the Bill & Melinda Gates Foundation (BMGF), the prime minister discussed the ongoing polio eradication campaign in the country as well as on the country’s response to the public health challenges amid the Covid-19 pandemic. The prime minister appreciated the work of BMGF for the socio-economic uplift of the most disadvantaged people around the globe, especially for promoting universal access to health services and combating of infectious diseases. He expressed gratitude, in particular, for BMGF’s partnership with Pakistan to rid the country of polio.

The prime minister reaffirmed that polio eradication remained a key national priority for the government. He mentioned that a special polio eradication campaign was launched in the country earlier this month (June 7-11), during which vaccine drops were administered to over 33 million children under five years of age.

The prime minister expressed his satisfaction over the substantive progress in cutting the transmission of the poliovirus in the country. He hoped that polio would be eradicated soon with the support of all partners.

Bill Gates expressed his appreciation for the prime minister’s leadership for this national cause, saying that while progress was encouraging, keeping up pressure would be the key to ending transmission for good.

The prime minister also highlighted Pakistan’s efforts to overcome the third wave of coronavirus in the country. While alluding to Pakistan’s potential in the Information Technology (IT) sector and Government’s business friendly IT policy, the prime minister encouraged Microsoft to further expand its footprint in Pakistan.

Separately, Prime Minister Imran Khan stressed the need for steps to ensure access of the common man to basic health services. The prime minister expressed these views in a meeting with Parliamentary Secretary to Ministry of National Health Services Dr Nosheen Hamid at the PM House. The meeting focused on the amount allocated for healthcare in the budget and the related initiatives, including the Insaf Sehat Card.

Members of National Assembly from South Punjab also called on Prime Minister Imran Khan here and discussed the ongoing development projects and problems faced by the people there. MNAs Amjad Farooq Khosa, Niaz Ahmed Jhakkar, Shabbir Qureshi and Rana Qasim Noon were among those who met the prime minister. The parliamentarians appreciated the government for distribution of Sehat Insaf Cards, ongoing education, health and basic infrastructure projects in Layyah, establishment of South Punjab Secretariat and relief for the common man in the annual budget.

Chairman Parliamentary Committee on Kashmir Shehryar Khan Afridi and Minister for Maritime Affairs Syed Ali Haider Zaidi also called on Prime Minister Imran Khan on Thursday. During the meeting, Shehryar Afridi briefed the prime minister about the performance of Kashmir Committee. Besides, the progress of ongoing development projects in Kohat and its positive effects on the life of common man were also talked about in the meeting.