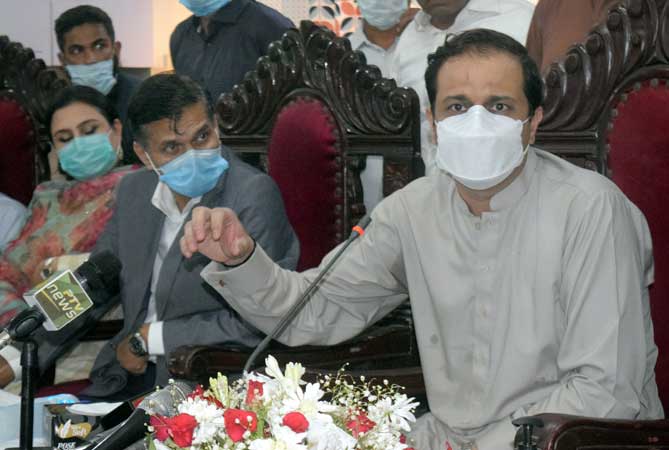 The spokesperson of Sindh Government and Advisor to Chief Minister Sindh on Law, Environment, Climate Change, and Coastal Development, Barrister Murtaza Wahab has said that the incompetent PTI government is responsible for all kinds of crises in the country. After the water crisis, it has now created a gas crisis across the country. He expressed these views while talking to the media after the inauguration of the Covid Vaccination Center at KMC’s Gizri Maternity Home yesterday.

He added that when he visited this hospital in the year 2018 general elections, he found that its doors were closed for the poor because of its exorbitant service charges. President Arif Alvi and Sindh Governor Imran Ismail were elected from the same constituency but they haven’t paid heed to make it a public facility. The hospital was closed even during the MQM regime. Then hospital was taken over by an NGO after the appointment of an administrator in KMC. Earlier, the hospital’s maternity home used to charge Rs 40,000 to Rs 50,000 for delivery, but now there are only Rs 500 charges.He said that the real issue is intentions. Every day more than one hundred patients are examined in their OPD and medicine is also given to them. Murtaza Wahab said that propaganda was being spread that no work is being done in Sindh. Critics of the Sindh and Sindh Government should come to Sindh and see the change and learn how important vaccination is to get back to normal life. Opening vaccination centers in various places will make it easier for the people here to get vaccinated. Barrister Murtaza Wahab said that the task of the PTI government is to plunge the country into crisis. The PTI government has given nothing but crisis to the people. Commenting on the Prime Minister’s reckless defense of the rising incidences of rape, Murtaza Wahab said that women are treated with respect in our country. The Prime Minister should immediately withdraw his irrational statement and beg apologize to the nation especially to women on his statement.

He said the Federal cabinet has decided to import wheat. If the Sindh government kept the price of wheat high, it was criticized. Now wheat will be imported at Rs 2600 per maund. In short, due to such policy of PTI, the economic crisis in the country is not going away. Barrister Murtaza Wahab said that MQM was also repeatedly asked to open the doors of the hospital for the poor but they did not agree. Now it is being managed by the same KMC. Hospital administration and the Sindh government have also opened a vaccination center here to prevent the spread of the virus. This is the sixth hospital of KMC in which a vaccination center has been set up, he concluded.