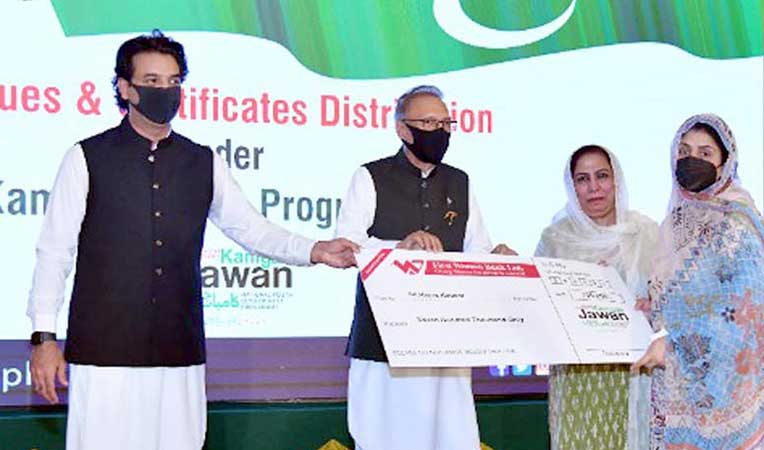 President Dr Arif Alvi Thursday urged the parliamentarians and media to create awareness among the women as well as the differently abled persons to avail the government’s exclusive loan facilities to help them establish their own businesses and achieve financial independence.

The president, addressing a ceremony to distribute cheques among the successful applicants for business loans and certificates among the participants of free courses on skilled education, said the business loan applications received by the banks from women was just five percent of the total amount they had specified for them.

Similarly, he said, the government had announced to provide Rs 2,000 each a month to around two million differently abled persons, but only 350,000 such people were registered with the government to avail the facility. First Lady Samina Alvi, Special Assistant to the Prime Minister Usman Dar, President of First Women Bank Shahida Javed, National Vocational and Technical Training Commission (NAVTTC) Chairman Syed Javed Hassan, parliamentarians as well as the beneficiaries of the Kamyab Jawan Programme attended the event held at the Aiwan-e-Sadr.

The president, who earlier distributed cheques and certificates among the beneficiaries, repeatedly stressed the need for promotion of artificial intelligence and computing, which, he said, could change the country’s fate by creating immense employment opportunities for the youth.

For the last two or three years, he said, his initiative of artificial intelligence and computing, and free courses on the subjects had created a vibrancy in the country, which would ultimately open up new avenues for progress.

He said besides creating business opportunities, the Kamyab Jawan Programme was also putting the youth on the course to achieve financial independence.

He said consequent to the government’s prudent policies especially for supporting the construction industry, the earnings of labourers had doubled while the textile industry was facing shortage of the skilled labour.

Speaking highly of the National Vocational and Technical Training Commission (NAVTTC) for training the youth in multiple disciplines, the president called for opting the shortcuts to equip the people with different skills and make them an earning hand. He exemplified that China had steered around 800 million people out of poverty just by equipping them with modern skill training, who not only earned sustenance for themselves but also created jobs for others.

The president also called for creating ease and facilitation for the woman loan applicants as the banks were not yet used to advance the interest free or without any security loans.

He said though the Kamyab Jawan Programme’s website provided guidelines to the loan applicants to prepare the feasibility of their business idea, yet there was a need for establishing systems for the purpose.

He said a one-window operation had also been started under the Ehsaas Programme to facilitate the applicants of business loans and other such schemes.

“There is a need to put the women on course towards the Kamyab Jawan Programme. We have to remove the barriers. Whenever they (women) go to any bank, there should be someone to guide them for feasibility preparation and loan processing,” he stressed. President Alvi said the State Bank had eased the loan process for housing loans as the applicants could also provide utility bills, tenancy agreement or any other evidence to make the banks ascertain their loan limit as well as judge the capacity to pay the installments.