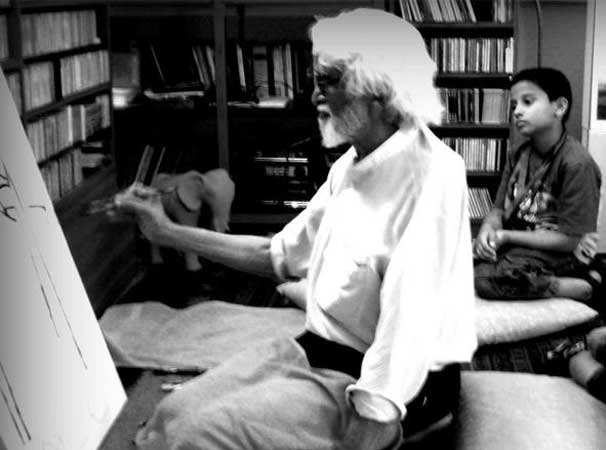 The founding member of former music band Strings shared three pictures that showed his son, Mikail, with Husain when the former was just over eight years old.

Young Mikail can be seen sitting across the celebrated artist and sketching him with unwavering attention.

‘My son Mikail was a little over eight years when he made a small sketch of Hussain sahib,’ he captioned the pictures

“My son Mikail was a little over 8 years when he made a small sketch of Hussain sahib,” he captioned the pictures.

He went on to describe the three pictures- one in which Mikail can be seen sitting across Husain; the sketch; and also shared how “Hussain sahib was so happy he signed the sketch and made a painting for him in return”.

Maqsood, who is himself an artist, loves to paint. A quick look at his social media reveals his brush strokes.

Husain passed away on June 9, 2011. The internationally recognised artist was known for his modified Cubist style of paintings that exuded bold, vibrant narrative strokes. He was the founding member of Bombay Progressive Artists’ Group, and also painted numerous Bollywood film posters. However, Husain’s works later became controversial for his portrayal of ‘nude’ Hindu gods and goddesses due to which he had to be in self-exile in Qatar due to constant threats to his life.