LAHORE: Multan Sultans became the Pakistan Super League VI champions after they defeated Peshawar Zalmi by 47 runs in the final at Sheikh Zayed Stadium in Abu Dhabi on Thursday night. Chasing a formidable target of 208, Peshawar could muster only 159 for the loss of 09 wickets in their allotted 20 overs. Kamran Akmal gave a blazing start to Peshawar with his knock of 36 including five fours and one six but could not get support from other opener Hazratullah Zazai who played a leading role in Peshawar’s qualification into the final. Zazai could not repeat his earlier performance and made only 06. He was caught by Shan Masood off Blessing Muzarabani. Next batsman Jonathan Powell was also dismissed for 06 runs. Shoaib Malik and Rovman Powell tried to build up the Peshawar innings but the duo could not keep up with the rising run-rate. Malik made 48 and Powell 23. The remaining batsmen could not withstand bowling of Imran Tahir who claimed three scalps for 33 to steer Multan to grand victory.

Earlier, a brilliant 98-run partnership between Sohaib Maqsood and Rilee Rossouw powered the Multan to set a daunting 207-run target for Peshawar after put to bat first. The opening pair skipper Mohammad Rizwan and Shan Masood hit 30 and 37, respectively, helping the team laid the foundation of a fighting total. Mohammed Imran broke the partnership in the ninth over when the off stump of Shan shattered when he tried to go for a wild slog against a slower delivery and totally missed it. He hammered six fours in the process. Imran again struck in his next over when he got the prized wicket of Rizwan after his bat kissed the ball that went to the safe hands of wicket keeper Kamran Akmal as Multan were reduced to 83-2 in 11 overs. Rizwan 30-ball knock included two fours and a six. At that stage, the match was seemed to be in Peshawar’s favour. However, Sohaib and Rossouw had other ideas as both put the Peshawar bowlers to sword and mustered a 50-run partnership off just 20 balls. They continued with their free hitting spree as Sohaib reached his fifty off 26 balls including 4 boundaries and three sixes. Rossouw was especially destructive as he soon raced to his half century off just 21 balls hitting five fours and three sixes. 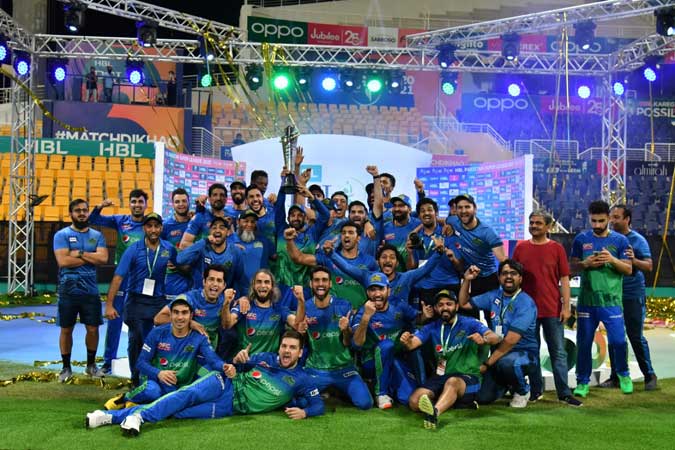 But on the very next ball he faced after reaching the fifty he has to go back to the dugout. He tried a reverse ramp off a Sameen Gul delivery but it went wrong and Mohammad Irfan took a simple catch at short third man and also ended the third wicket partnership of 98 balls off 51 balls. Sameen was exceptionally good with the ball for Peshawar as after bowling three superb opening overs, his fourth over yielded two back-to-back wickets as at the very next ball Sameen trapped new man Johnson Charles in front of the wickets with a perfect yorker. However, it did not slow Multan as Khushdil Shah scored 15 runs off 5 balls with two sixes and Sohaib remained unbeaten on 65 off just 35 balls hitting six boundaries and three sixes. Sameen finished his four overs for 2-26. Imran took two wickets but conceded 47 runs. Wahab Riaz and Amad Butt both conceded 52 runs each in their four overs quota while Irfan finished his spell with 0-27.