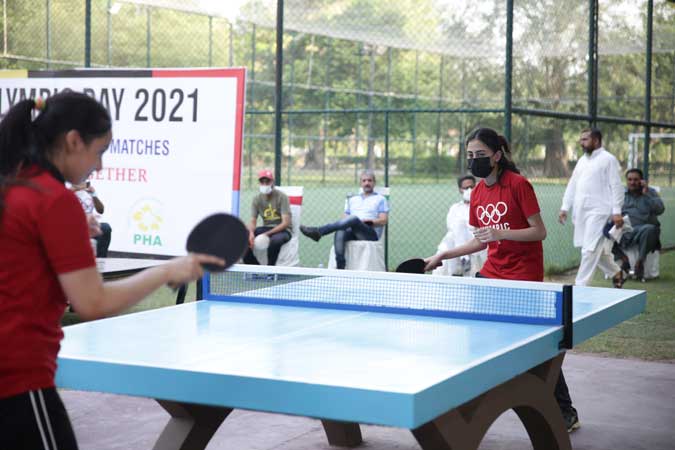 LAHORE: The Pakistan Olympic Association (POA) celebrated the Olympic Day on June 23 by organising exhibition table tennis matches at Bagh-e-Jinnah. National, international athletes (male and female) played in these matches. Civil society and children of all ages also participated. Shaukat Javed, Vice President of the Pakistan Olympic Association, graced the occasion as chief guest. Presidents and Secretaries General of the affiliated units of the POA also participated in the event.

The Olympic Day is celebrated worldwide on June 23rd of each year to commemorate the birth of the Modern Olympics Games that were held in Paris back in June 1894. “This day is one of the key events of annual calendar where we engage with partners for promotion of Olympism in our community. Thousands of people of all ages participate in sporting and cultural activities, such as fun runs, exhibitions, music, tree plantation, beach cleaning and educational seminars,” said a spokesman for the POA.

PHF also celebrates Olympic Day: The Pakistan Hockey Federation (PHF) also celebrated the Olympic Day on June 23 by organising matches in different districts and affiliated departments across the country. In a match at Lahore, Olympians XI defeated International XI 2-0. Both goals were scored by former Olympian Rehan Butt. At the end of the match, chief selector of the PHF Olympian Manzoor Junior, head coach Khawaja Junaid, Olympian Shahbaz Junior and office-bearers of the Punjab Hockey Association attended the closing ceremony and distributed the prizes. Speaking on the occasion, Manzoor Junior hailed the PHF efforts for organising matches to celebrate the Olympic Day. According to the PHF, games were also played in Karachi where a women vs youth match was played. Similar matches were also held in Vehari, Bahawalnagar, Sadiqabad, Toba Tek Singh, Gojra and Faisalabad. Mari Petroleum Company also organised a match on this occasion at the Ayub Stadium in Rawalpindi.