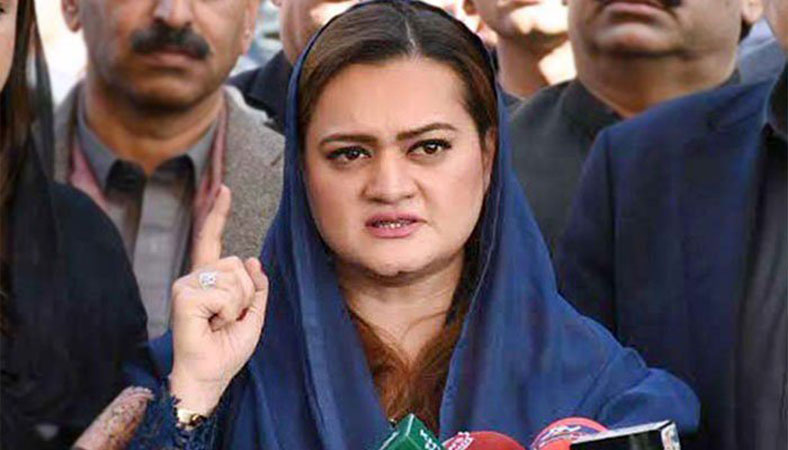 ISLAMABAD: PMLN Secretary Information Marriyum Aurangzeb said PMLN will not let PTI, the nation, and the world forget the promises and tall claims Imran Khan fooled the nation with before getting power and will make sure that he is answerable and accountable for every single one of them.

But Marriyum said she won’t let anyone forget any of this because it a chain of events, the continuation of a grand conspiracy against Pakistan that started in 2014 against the 3-time elected Prime Minister Nawaz Sharif. She said the conspiracy unfolded and using the office of Chief Justice Saqib Nisar, Nawaz Sharif was removed from the presidency of his party. The script unfurled further and the RTS was meddled with and the selected, false, incompetent, and unqualified, corrupt gang was imposed on the country, she reminded.

The former information Minister said she won’t let anyone forget the video of Judge Arshad Malik that bares this conspiracy, she said. She said the entire opposition including Shahbaz Sharif ere sitting in front of this imposed government, after passing through the stinking mill of political revenge, even after being imprisoned in death row cells.
She said the government’s performance in 2 years, 10 months, and seven days was mind-blowing. This seems like the work of a superhuman she said. It is beyond human comprehension what supernatural power made it possible. What were these invisible powers through which Imran managed to ransack every sector, every department of the country is such limited time, she said.

She said the performance of this government includes 6 times cabinet reshuffle, 4 times change in the finance minister, changing the FBR chairman 4 times, changing the board of investment chairman multiple times, 16 percent inflation, 5 million unemployed, 20 million under the poverty line, over 100 percent increase in gas and electricity, over 2 hundred percent increase in sugar and flour, infant milk 31 percent, medicine 500 percent, tomatoes and ginger Rs 700 rupees per kilogram with the parliament and media houses shut.

She said she won’t allow anyone to forget attacks on newspapers, news channels, and journalists, won’t let, gagging of the media, parliament, and opposition. This government’s performance includes putting every Pakistan under Rs 175,000 debt, she said.

She said she had decided that she would do a positive speech over the budget because the government had rented a renowned craftsman as its speaker. but after being bashed by budget books and vulgar abuses by the government MNAs she had come to the conclusion that there is no hope of any good from this government. She said she figured out that all this was done by the government on 16th June to drown out the voices of those daughters and mothers who stood in scorching heat during Ramazan just to save Rs 20 on sugar under this government.

She said after careful thinking she had arrived at the conclusion that this
Marriyum said there was no department left whose blood has not been sucked and there is no section left whose thin bones have not been crushed. This she said is a bone-crushing, blood-sucking Zakoota Jin budget. She said this Zakoota Jin is responsible for every wrong because Imran can’t possibly be guilty, she taunted.

She slammed the government’s Media Development Regulatory Authority for being a fascist law that would gag every voice and fulfill Imran Khan’s vision that peace could only be achieved in the grave, she said Imran wanted to turn the entire country into the silent grave.

She lashed out at the government’s policy of leasing out national assets for money. She also slammed the government’s bulldozing of election reforms through the parliament saying that Imran is desperate for power and knows that he cannot win a single constituency which is why he wants to control the entire election by rigging Electronic voting machines this time.

She also blasted Imran’s statement over rape victim-blaming and asked if the raped little child Zainab was wearing any provocative dress. Marriyum also reminded Imran that he did not have any right to say that he would end Pakistan’s nuclear arsenal once the Kashmir issue was resolved because this nuclear arsenal was not his private property and he had done nothing to develop it. She said it was a sacred trust of the people of Pakistan and the state of Pakistan.