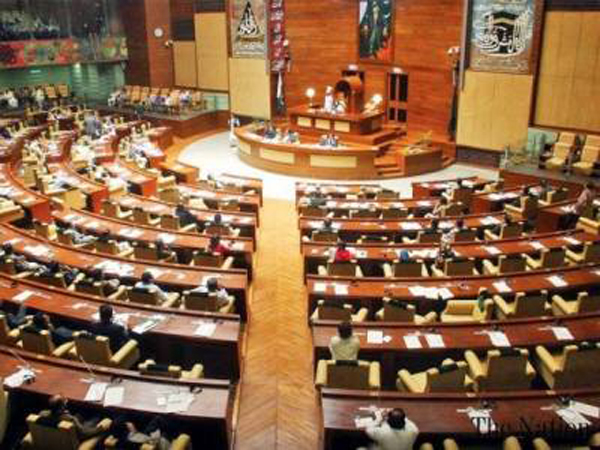 ISLAMABAD: The Senate on Thursday approved 114 recommendations on the Finance Bill 2021 which would be forwarded to the National Assembly for consideration.

Speaking on the occasion, he thanked the members of the committee and minister for finance and his team while working on the recommendations.

The Senate proposed to increase the 20 percent pension and basic pay of the government employees and to increase the retirement age to 62 years. It also recommended enhancing minimum wages to Rs 25,000 for the Islamabad Capital Territory.

The house recommended to the National Assembly that withholding tax on the health care sector should be reduced from 8% to 3 % and general sales tax exemption should be restored up to the extent of edible items which are part and parcel of the daily life of the common man of the country.

The Senate also recommended that a fresh National Finance Commission (NFC) award be announced in terms of Article 160 of the Constitution.

The Upper House also recommended that indirect taxation should be reduced and no further increase should be made in the petroleum levy.

The upper house also recommended that the budget for health and education sectors should be doubled.

It also recommended that an allocation be made for the provision of interest-free loans to help small farmers with regard to the escalating cost of agriculture inputs including seeds.

The house also recommended that an allocation be made for a special pay package and training in public health care for paramedical staff and nurses performing their services during the COVID19 pandemic.

It recommended that higher education institutions should be funded additionally so that they may equip themselves with the latest IT and LMS systems for teaching online classes in any discipline.

It recommended that young entrepreneurs aged 18 to 25 may be given more incentives in terms of taxes and bank loans for setting up manufacturing units.

Furthermore, the Senate recommended that GST should be reduced to 8.5% from 17%.

The house recommended that to restore zero-rating on milk and fortified dairy-based nutritious powder and restoration of previous sales tax of 10% on value-added dairy-based products.

The Senate recommended that the raw materials required for local manufacturing of welding electrode products must also be included in the 5th schedule.

It recommended that to facilitate the construction industry, contractors may be allowed to make payments in cash to the supplies of material and labour.

Leader of opposition in the Senate Yousaf Raza Gillani also appreciated and thanked Senate Standing Committee on Finance Committee for tremendous work on the recommendations.

Leader of the House in the Senate Dr. Shahzad Waseem also congratulated Senate Finance Committee for proposal making recommendations on the Finance Bill, 2021.

He said tax thieves had no place in the country.

Opposition Leader in the Senate raised the issue that the Senate budget proceedings were not live broadcast.