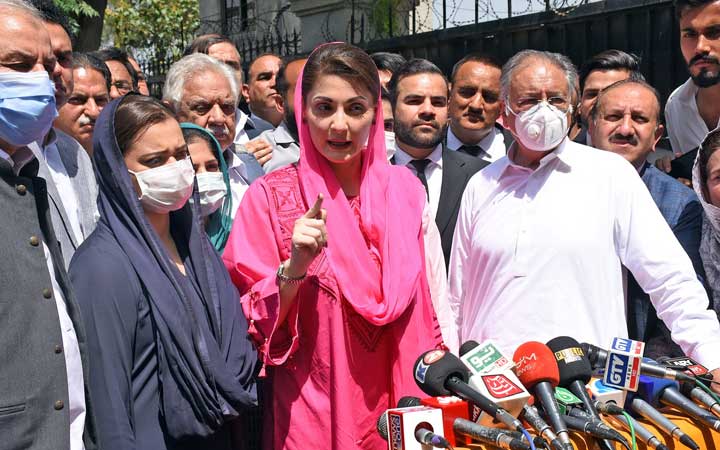 PML-N Vice President Maryam Nawaz on Wednesday lashed out at Prime Minister Imran Khan over his recent statement in which the premier had said that men are ‘tempted’ when women wear less clothes and, hence, it leads to a rise in sexual violence in society.

“Imran Khan’s statement is a reflection of a criminal mindset. He has revealed his shallow thinking to the nation,” she said during a press conference. “[He is] a person who validates rape and holds the victim responsible. Pakistan needs to be rid of this mindset of rape apologists,” she added.

The PML-N leader went on to question whether Zainab’s rape and the motorway incident were a consequence of what the victims were wearing. “He [the prime minister] should be ashamed of such a statement,” she said. “Through his remarks in the interview, the premier has insulted rape victims,” she added.

The PML-N leader said Pakistan needs freedom from a mentality that holds the victim of a violent incident to blame. “What of the little children that are sexually abused; are they subjected to it [sexual violence] because of their dressing?” she asked.

The PML-N leader accused PM Khan of insulting rape victims, adding that his words would add insult to injury for parents of the victims of these tragedies. “They will be ashamed as you (prime minister) have held them responsible,” she said.

When asked about her father’s return, Maryam said if she was provided a guarantee that Nawaz Sharif’s life would not be in danger, she would call him back to the country this instant.

Taking a jibe at the government, she said the fourth finance minister of the incumbent regime had presented its third federal budget.

Maryam said that Prime Minister Imran Khan has no right to comment on Pakistan’s nuclear programme. “He [the prime minister] is not [an elected] representative of the people of Pakistan. He has been selected and has no right to comment on Pakistan’s nuclear status,” she said, and added that the premier is not the custodian of the country’s nuclear programme, rather Pakistan’s population of 22 billion is its custodian, for which the people and the leaders have made sacrifices. In this connection, she gave the examples of “former prime minister Zulfikar Ali Bhutto embracing martyrdom and PML-N supremo Nawaz Sharif being exiled.” “You [the prime minister] should not even talk about Kashmir, on which you have made a deal,” she said, adding that if the premier believed he could start a new debate by making such remarks, he was wrong.

Maryam said Pakistan’s nuclear programme guaranteed its security and had it not existed, the country would have been facing big issues other than just Kashmir today. “You, a selected prime minister, have no right to make such a statement [about the nuclear programme],” she added.