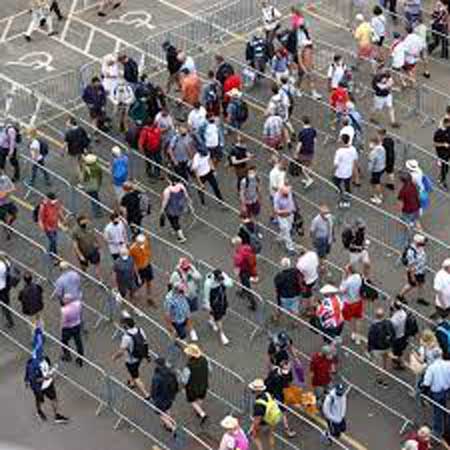 LONDON: There will be more spectators than anticipated at some of England’s international matches in the coming weeks, after a selection of fixtures in the series involving Sri Lanka and Pakistan were given the status of pilot events. When the UK government extended its current Covid-19 protocols until July 19, it was feared that grounds would be permitted to admit only 25 percent of their capacities. But it has now been announced that several games will be included in the Government’s Events Research Programme meaning capacities will be raised to at least 50 percent of capacity.

The games identified for increased capacity at present are the ODIs against Sri Lanka at Emirates Riverside (on June 29), the Kia Oval (July 1), and Bristol (July 4), as well as the ODI against Pakistan at Edgbaston on July 13. It is anticipated that other venues will be included in the coming days. All the matches in both series are sold out. The T20I against Sri Lanka at the Ageas Bowl on June 26 is not part of the pilot, however, while the two T20I matches in Wales (June 23 and 24) are subject to separate discussion with the Welsh Government. “Summer is all about cricket and I’m delighted to be able to include England’s upcoming ODI and IT20 series against Sri Lanka and Pakistan in our pioneering Events Research Programme,” Culture Secretary Oliver Dowden said. “We will continue to do everything we can to get as many as possible back watching live sport and cultural events as safely and as quickly as possible.”

The second Test of the series, against New Zealand at Edgbaston, was part of a similar pilot event. On that occasion, the ground was able to host 70 percent of capacity, though no U16s were admitted. On this occasion, it is understood that the rule forbidding U16s to attend will be lifted but there is no guarantee that capacities will be raised above 50 percent. This level is important to the hosting grounds, however, as it is likely to allow them to permit all corporate hospitality ticket holders, which account for a disproportionate amount of revenues. “The final capacity will be determined once we have had more detailed discussions with the Government, with our Safety Advisory Group and city stakeholders,” Stuart Cain, chief executive of Warwickshire, said. “We just ask all ticket buyers to please bear with us for a few days as we will have further news to confirm very soon.” With the Test series against India not starting until August, hopes remain that there will be full houses in England at some stage this summer.