Nawaz, Fazl and Maryam not stakeholders in political setup 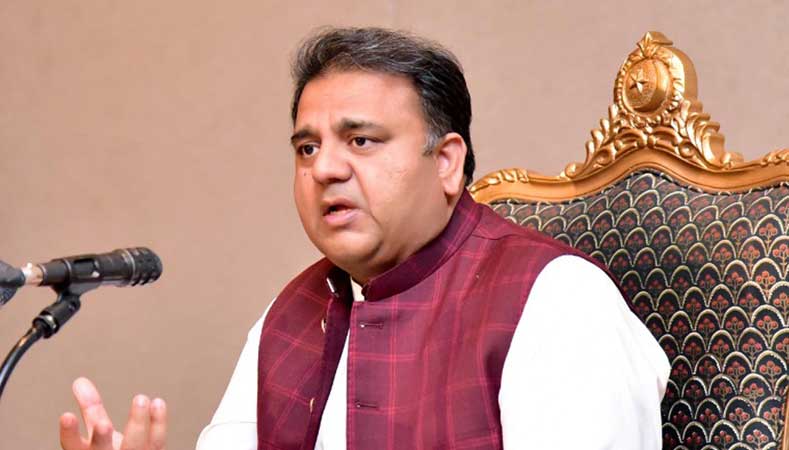 Minister for Information and Broadcasting Chaudhry Fawad Hussain Tuesday said the Election Commission of Pakistan (ECP) is an administrative body as per constitution, which is bound to implement the laws enacted by the parliament.

Briefing media persons about the decisions taken in the federal cabinet meeting chaired by Prime Minister Imran Khan, he said the ECP cannot raise questions about the parliament, which is the supreme law-making institution. Similarly, he said, the parliament has the prerogative to frame laws while only the Supreme Court can declare whether any legislation was ultra-vires to the constitution or otherwise. The political leadership has the right to decide as to which procedure should be adopted for holding elections, he added.

The minister said the government has already announced a comprehensive strategy to make the election process transparent and immaculate, that too in consensus with all the stakeholders.

As regards Shehbaz Sharif’s proposal of convening an all-parties conference over the electoral reforms, he said the leader of opposition in National Assembly was becoming the part of a conspiracy which is meant to weaken the Parliament. The government, he said, would discuss the electoral reforms only with the parliamentary leaders. “We do not deem the persons like Nawaz Sharif, Maryam Nawaz and Maulana Fazlur Rehman as stockholders in the system,” he added.

Fawad urged the ECP to take measures for holding the forthcoming local bodies and bye-elections through the electronic voting machines (EVM). “This will not only help overcome the shortcomings in the electoral process but also strengthen the people’s confidence in the EVMs,” he said, adding that it would eventually ensure the use of the gadgets in the next general election.

He said the government was also committed to granting the right of vote to some 8.5 million overseas Pakistanis by introducing I-voting or the Internet voting mechanism. The reluctance of Pakistan Muslim League Nawaz (PML-N) and Pakistan People’s Party (PPP) in granting voting rights to the expatriates was beyond comprehension, he said. “They are, in fact, afraid of the expats as they consider them (expats) as the staunch supporters of Prime Minister Imran Khan,” he added.

Fawad said the overseas Pakistanis were immensely contributing in the national economy by remitting over Rs 1,000 billion [per annum] to the country. Over 90 per cent of the total remittances was based on less than $ 500 dollars, which showed that the major portion of total amount was being sent by the overseas workers, he added.

He said the expats are sending huge remittances as they had complete trust in Imran Khan’s in the leadership. “On the contrary, they did not send the money during the regimes of PPP and PML-N as they knew about the corrupt practices of their leaders Asif Ali Zardari, and Nawaz Sharif and Shehbaz Sharif,” he added. “The overseas Pakistanis are of the considered opinion that the two opposition parties’ leadership are corrupt and will devour their (sent) money,” he remarked.

Regarding decisions taken by the federal cabinet, the minister said the meeting okayed the ‘Public Properties (Removal of Encroachment) Bill, 2021’, aimed at retrieving state land from the grabbers. Under the law, he said, a federal government officer would be empowered to issue show cause notices to the encroachers of state land and initiate actions against them on their unsatisfactory reply. The law also proposes fine and punishment for the land grabbers and encroachers, with setting up a special tribunal for speedy trial in such cases, he added.

He said the cabinet also gave green light to import of one million metric tonnes (MT) of wheat to meet increasing demand of the commodity in the country. The government had already allowed the import of 3 million MT of wheat, he added.

The minister said the cabinet gave the nod for appointments of Sajid Baloch as the Executive Director of International Vocational and Technical Training Commission, Aslam Khan as chairman of Pakistan International Airlines Corporation Limited (PIACL) Board, and Asim Rauf as Chief Executive Director of Drugs Regulatory Authority of Pakistan (for next three months), besides five directors of the Diamer-Bhasha Dam Company. It also approved the grant of dual nationality facility to Pakistanis living in Luxembourg, he added.

Fawad said the cabinet directed the Ministry of Finance to submit a comprehensive report about writing off loans from various banks. He said a committee was constituted under the command of the Minister for Human Rights to examine the matters related to a housing society for the Supreme Court staff.