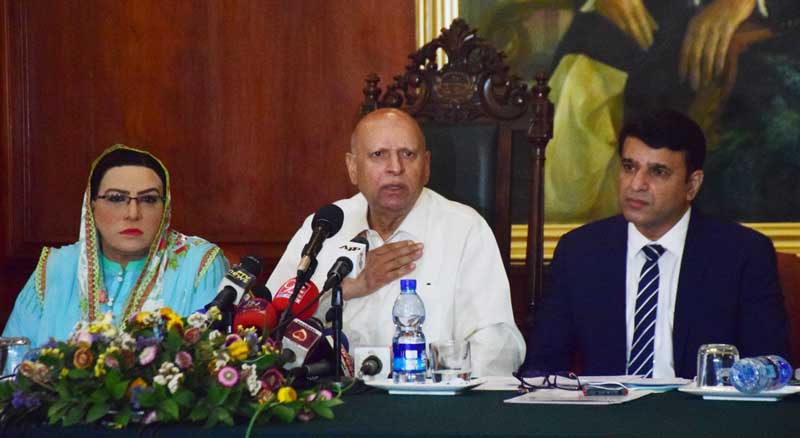 Punjab Governor Chaudhry Mohammad Sarwar proposed reserved seats in the National and Provincial Assemblies for Overseas Pakistanis so that they can participate in the democratic process of the country. He said that we would try to reach a consensus with the opposition parties on the issue of giving the right of vote to overseas Pakistanis. Prime Minister Imran Khan’s decision to refuse USA to use Pakistan’s airbase is in line with national aspirations. The opposition should not politicize issues of national interest. Overseas Commission Punjab has resolved 10,000 complaints of overseas Pakistanis in two years, and recovered lands worth 25 million from land grabbers, and handed them over to overseas Pakistanis. He stated this while addressing a press conference along with Provincial Information Advisor Dr Firdous Ashiq Awan, Vice Chairman Overseas Commission Punjab Wasim Ramey and others at Governor’s House on Monday.

Punjab Governor Chaudhry Mohammad Sarwar, in reply to a question, said that Prime Minister Imran Khan’s decision to not give any airbase to the United States is not due to any pressure from the opposition parties but only to safeguard the national interest. As far as Maulana Fazlur Rehman’s statement is concerned, everyone knows that nobody can pressurize Prime Minister Imran Khan, he added. Chaudhry Mohammad Sarwar said that the government’s decision of giving the right of vote to overseas Pakistanis is a historic step and opposition parties should support this decision instead of obstructing it as overseas Pakistanis are playing an exemplary role in Pakistan’s economic development. He said: “I suggest that there should be reserved seats for Overseas Pakistanis in the National and Provincial Assemblies so that they can participate in the country’s democratic process.”

Governor Punjab said that the scope of the Overseas Commission Punjab is now being extended to Tehsil level after districts so that the problems of Overseas Pakistanis can be solved in a prompt manner. He further said that he also thanks the incumbent and former Chief Justice of Lahore High Court who appointed special judges for cases of overseas Pakistanis due to which these cases are being settled within six months.

Muhammad Wasim Ramey, Vice Chairman, Overseas Commission Punjab, said that District Overseas Pakistanis Committees have been formed in 29 districts for immediate solution of grievances of Overseas Pakistanis. The committee will comprise of Chairman, DC Vice-Chairman, DPO Member and ADCR Secretary, whereas it has also been decided to set up a Board of Revenue Facilitation Center and a Police Station in the OPC office. He further said that a mobile app is being developed with the help of the Punjab Information and Technology Board for the convenience of overseas Pakistanis which will be launched soon, adding that with the special efforts of the Prime Minister of Pakistan and the Chief Minister of Punjab, 100 percent problems of the overseas Pakistanis will be solved after the approval of the OPC act. He said that about 5300 complaints were resolved during the PML-N government, while the present government has resolved more than 9300 complaints in two and a half years.