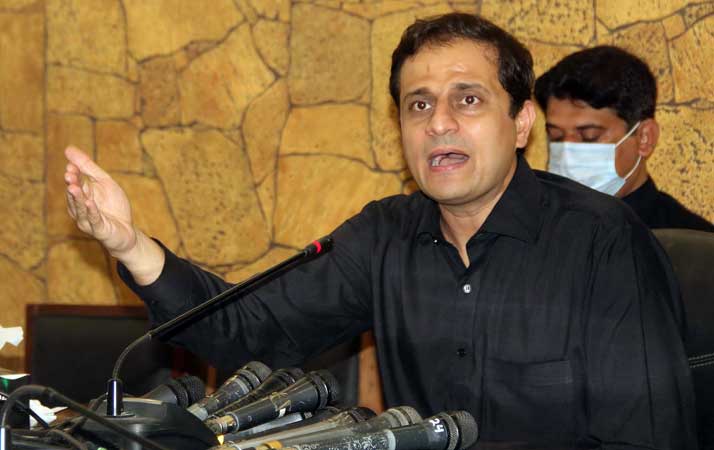 Barrister Murtaza Wahab, Spokesperson for the Sindh Government and Adviser to the CM Sindh on Law, Environment, Climate Change, and Coastal Development, has said that the incompetent PTI government has no tangible performance to show to the people of Pakistan. “They resort to propaganda to make failed attempts to divert attention from public issues by leveling baseless allegations against the Sindh government while we will continue to raise our voice against the injustices of the PTI government in Sindh”. He expressed these views while addressing a press conference.

He further said that Fawad Chaudhry is suffering from the phobia of PPP’s Sindh government. In the past, he was not tired of trumpeting the greatness of PPP. Now he is axing his grind with PTI and very likely he will be dancing to the tunes of some other party soon. Wahab remarked that it has become their habit to speak against the facts because they have nothing to say truthfully. After their selection on July 25, 2018, Imran Khan had a sweet dream for the nation out of which none was fulfilled. One crore jobs, five million houses, and all the other hollow promises including not going to the IMF have died. Barrister Murtaza Wahab said that the atmosphere of the parliament has deteriorated since the people who are abusive, rude, and immoral have come to power. They have nothing to do with parliament or the people. Sindh Chief Minister Murad Ali Shah always annoys PM IK because he gives him a hard time by talking about facts. The PM likes silent people like Usman Bozdar who cannot answer him. It is their mistake to expect that Chairman Bilawal Bhutto Zardari or Murad Ali Shah will remain silent. Murtaza Wahab further said that if the population of Sindh was not reported correctly, then the Chief Minister Sindh would take it up in the Council of Common Interests.

The Sindh government spokesperson pointed that on the issue of the census, MQM and GDA sided with Imran Khan instead of the people. The controversial census approval committee included Ali Zaidi, Aminul Haq, and Fehmida Mirza. Later, they came here and shed crocodile tears. The MQM people keep saying that Karachi contributes 70% to Pakistan’s economy. Murtaza Wahab said that the schemes of other provinces are visible in the public sector development program (PSDP) but there is no scheme of the province which runs the economy of Pakistan. Why are the allies silent on this issue? Wahab said that we raise questions and federal ministers and prime minister start alleging us. The limit is that Fawad Chaudhry wants to audit the money given to Sindh. But the question is: Do you do favors by giving money? Is this your money? It is the responsibility of the federation to audit these funds. The Auditor-General is the representative of the federation who conducts the audit on an annual basis.

Barrister Murtaza Wahab also said that Imran Khan had asked the Railway Minister in 2017 that he should resign but now why are they silent. It means there are not one but two Pakistans. How do these people criticize the governments of the past? They have added thirteen trillion circular debt. Earlier circular debt was 1100 trillion when the PTI government came. Now it has increased a lot. Sugar, flour, medicine, petroleum, gas scandals have been unearthed by the current regime. Let’s talk about accountability. If any action has been taken on the sugar issue. Amir Kayani has been removed in a drug scandal, but if any action was taken against him?

On the contrary, Amir Kayani was made the general secretary of PTI. When petrol became cheaper, petrol disappeared from the whole country. No action was seen against Nadeem Babar? Article 158 says that the first right to gas is of the area where the gas is coming from but we do not get gas. Barrister Murtaza Wahab discussing the water crisis in Sindh said that check on Guddu Barrage how much water is coming in Sindh. It is the federal government that runs controversial canals. What is the problem if the Sindh Chief Minister or PPP Chairman raises this issue? Why does it hurt you? We have repeatedly said that the problem of Sindh is not with Punjab but with Irsa. In response to a question, Murtaza Wahab said that Fawad Chaudhry says Imran Khan will lead himself, so who led in 2018? He may not know that every single penny is audited, what do you give to such a large province? How are you using our money? This is our question. Sindh did not get Rs. 85 billion in NFC. We have earmarked Rs108 billion for new schemes in Karachi. KMC and DMC get separate money. We have not been able to work in the transport sector because of the Sovereign Guarantee. Sindh Government Spokesperson said that tenders for Karachi buses would be opened on July 17. The Edhi line would be completed in two months.