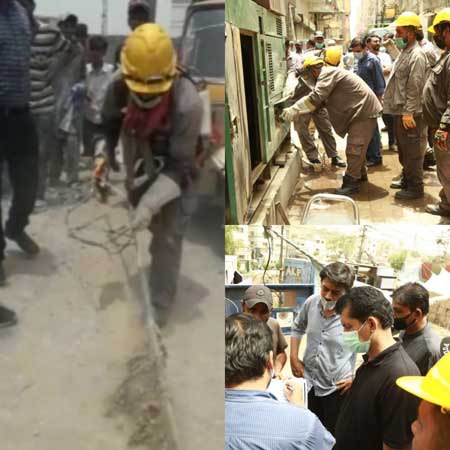 In a bid to provide safe and reliable electricity to its consumers, K-Electric continues its drive against the menace of Kunda and generator mafia across the city. With the support of Electric Inspector Karachi (EIK) representative, Mr Khalid Qaimkhani, KE media and security teams alongside Law Enforcement Agencies, 08 generators located in 06 different areas of Liaquatabad were successfully disconnected.

More than 1,750 residential and commercial buildings were being powered through illegal installations of 75 KVA to 150 KVA generators in Block 3, 4, 10, Quwait ul Islam Colony and Nairang Commercial zones in Liaquatabad.

Similarly, during another raid in Landhi an extremely hazardous underground cable being used for illicit extraction of electricity was disconnected by KE teams of IBC Landhi. While the residents have been urged to abstain from such malpractices and shift to legal and safe metered connections.

During the crackdown, KE teams were faced with aggressive resistance from the area locals backed by the generator mafia, who were neither following Covid-19 safety protocols. Officials of EIK also issued warning to the owners of the generators, and initial reports were filed, while further raids are expected over the days to come.

The unauthorized use of KE infrastructure, by generator mafia, for illegal power supply, poses severe public-safety hazards and causes serious accidents in monsoon season. It was further clarified that provision of electricity in License Area, other than by K-Electric, is in violation of NEPRA Act 1997, section 21, and there is an urgent need to take action against such malpractices.