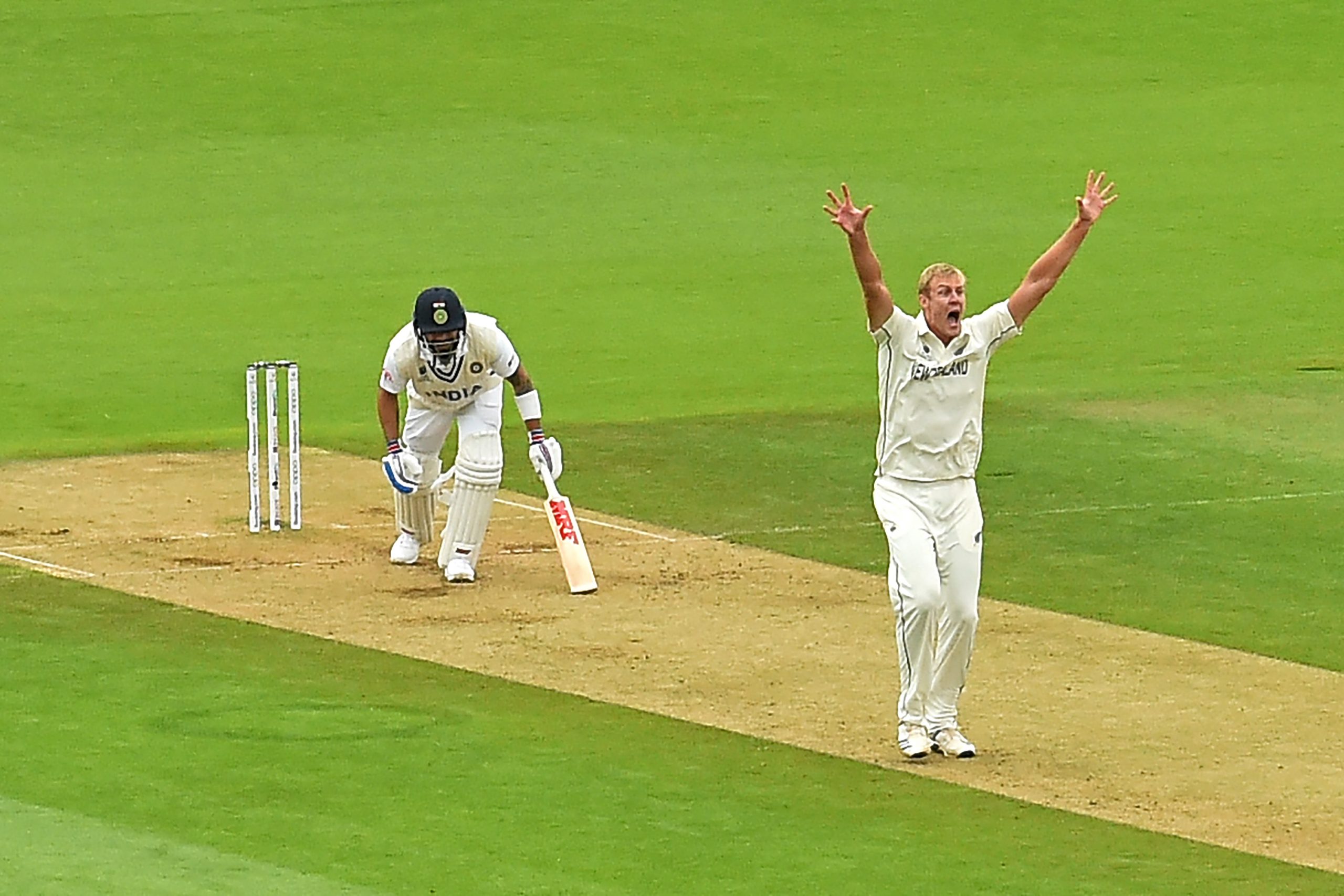 SOUTHAMTON: Kyle Jamieson captured the prize wickets of India captain Virat Kohli and Rishabh Pant in quick succession to give New Zealand the edge in the disrupted World Test Championship final at Southampton on Sunday.

Jamieson, in only his eighth Test, removed Kohli for his overnight 44 and then dismissed the dangerous Pant for just four to leave India 156-5 in their first innings on the third day.

Jamieson’s figures at the end of the over in which he snared Pant were a supremely miserly 3-21 from 19 overs including 12 maidens.

India had lost two wickets for 10 runs after starting Sunday’s play on 146-3, with bad weather meaning only 64.4 overs were possible in the first two days.

After a wet outfield delayed the start of the third day’s play by 30 minutes, India resumed, with Kohli unbeaten on 44 and vice-captain Ajinkjya Rahane 29 not out.

The gloomy conditions, which saw the Hampshire Bowl’s floodlights switched on, made life tough for batsmen particularly as they assisted a New Zealand pace attack looking to swing the ball in the air. Meanwhile, a green-tinged pitch also offered the promise of movement off the seam.

Kohli, 10 years to the day since his Test debut against the West Indies in Kingston, fell to the eighth ball he faced Sunday when the towering Jamieson got a full-length delivery to nip back and strike the star batsman on the front pad.

The India skipper understandably reviewed Michael Gough’s decision of ‘out’ but the English umpire’s verdict was upheld, with ball-tracking technology indicating the delivery would have hit the top of leg stump, with India now 149-4 in the 68th over.

It was the end of a 132-ball innings where, such was New Zealand’s accuracy, the only boundary Kohli hit was a cover-driven four off left-armer Neil Wagner that got him off the mark.

Pant was still on nought when a tight umpire’s call verdict spared him being lbw to Jamieson, bowling round the wicket to the left-hander.

The usually free-scoring Pant needed 20 balls to get off the mark, with a four through midwicket off Jamieson.

Two balls later, however, Jamieson dismissed the wicketkeeper when Pant, unable to resist a full-length delivery that was moving away from him, drove loosely outside off stump and was well caught at second slip by Tom Latham.

Friday’s first day was washed out without any play at all and there were three interruptions due to bad light on Saturday.

Match referee Chris Broad, however, does have a special dispensation to extend this match into an additional sixth day on Wednesday if he rules extra time is required to compensate for overs lost earlier in the game.

This match, the culmination of the inaugural World Test Championship that has spanned two years of series between the leading Test nations, is worth $1.6 million to the winners and $800,000 to the runners-up.