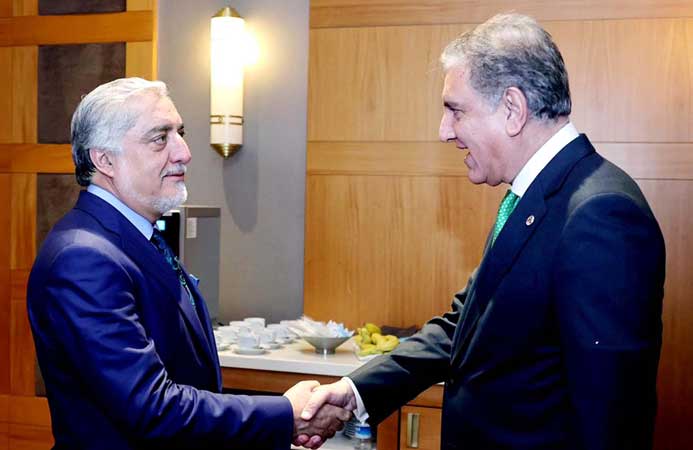 The foreign minister said this during a meeting with Chairman of Afghanistan’s High Council for National Reconciliation Abdullah Abdullah on the sidelines of Antalya Diplomatic Forum in Turkey on Friday.

The foreign minister added that the progress in the Afghan peace process is critical to reduce space for spoilers, who did not wish to see return of peace in the region. He underscored that negative statements and blame game only serve to vitiate the environment and strengthen the hand of spoilers who wish to derail the peace process.

The foreign minister said that Pakistan looks forward to working closely with all Afghan leaders to ensure that the Afghan peace process and bilateral relations move forward smoothly. He said that with its sincere reconciliation efforts, Pakistan has succeeded in bringing the US and the Taliban to the negotiating table and holding intra-Afghan talks.

He said now it’s the responsibility of the Afghan leadership to seize this rare opportunity and find a political solution to the Afghan problem through comprehensive dialogue.

Recalling the successful visit of Abdullah Abdullah in September 2020, the foreign minister reaffirmed Pakistan’s policy of maintaining the broad engagement with Afghan political leadership to forge deeper mutual understanding on the bilateral relations and the Afghan peace process.

Qureshi highlighted Pakistan’s meaningful contribution to facilitate the direct talks between US and Taliban as well as the Afghan parties.

Responding to media queries regarding unwarranted remarks by the Afghan NSA, the Spokesperson stated that Pakistan’s role in the Afghan Peace Process had been widely acknowledged by the international community.

“The repeated impertinent and unwarranted remarks by the Afghan NSA are deeply concerning as they are tantamount to a calculated attempt by his office to disregard and nullify the progress in the peace process so far,” he added.

“We would also like to remind the Afghan NSA, of mutual understanding reached in Afghanistan-Pakistan Action Plan for Peace and Solidarity (APAPPS), obligating both sides to avoid public blame-game and use official channels to discuss complete gamut of bilateral relations. Statements that erode mutual trust should be avoided,” the Spokesperson maintained.