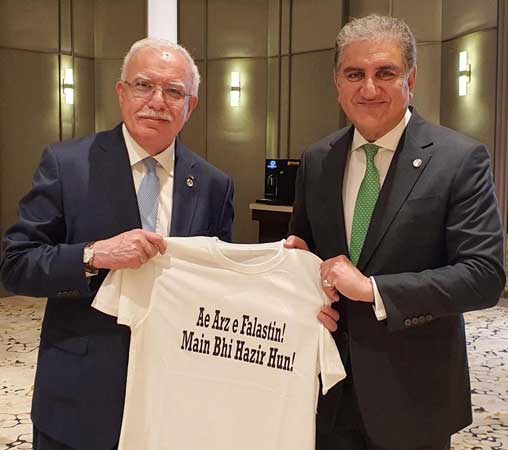 estForeign Minister Shah Mahmood Qureshi on Friday said the Strategic Engagement Plan (SEP) of European Union had ushered in a new era in bilateral ties and provided a solid architecture for multidimensional cooperation.

The minister, in a meeting with the EU High Representative/Vice President Josep Borrell on the sidelines of the Antalya Diplomacy Forum in Turkey, stressed that Pakistan-EU relations had further strengthened with the implementation of the SEP signed in June 2019, the Foreign Office said.

The two leaders discussed the entire spectrum of Pakistan-EU relations as well as global and regional situations, including the Afghan peace process and Indian Illegally Occupied Jammu and Kashmir (IIOJK).

Emphasizing the importance of bilateral trade, the foreign minister highlighted that the GSP Plus had been a mutually beneficial undertaking and played an important role in the growth of trade between the two sides.

He reiterated Pakistan’s firm commitment towards the GSP Plus preferential trade regime and effective implementation of the twenty-seven related international conventions.

The two leaders also exchanged views on the Covid-19 pandemic.

Appreciating the EU’s support, the foreign minister delineated the steps taken by Pakistan to effectively tackle the situation.

Qureshi also briefed on Pakistan’s progress towards the comprehensive implementation of the Financial Action Task Force (FATF) Action Plan and sought the EU’s support in the review process.

He emphasized that at a time of rising Islamophobia, racism and populism, the international community must show a common resolve against xenophobia, intolerance and incitement to violence on the basis of religion or belief.

In the regional context, the foreign minister briefed on Pakistan’s vital contributions to the Afghan peace process, and stressed that the conflict could only be settled through an Afghan-led and Afghan-owned political process.

Both sides urged all the Afghan factions to seize the historic opportunity presented by the current peace process to settle the conflict through political means.

The foreign minister emphasized the need for continued engagement of the international community after withdrawal of foreign forces from Afghanistan.

The two sides agreed to cooperate in facilitating the peace process, resettlement of Afghan refugees, preserving the socio-political gains of the past two decades and supporting Afghanistan post-withdrawal.

The foreign minister also briefed the EU HR/VP on the continued precarious human rights and security situation in the IIOJK and the latest moves by the Indian government to perpetuate its illegal occupation.

He urged the EU side to take note of the systemic and gross human rights violations in the IIOJK and play its role for resolution of the dispute in accordance with the United Nations Security Council resolutions and the aspirations of the people of Jammu and Kashmir.

EU HR/VP Borrell shared his concern on the prevailing situation in the IIOJK.

EU HR/VP Borrell extended an invitation to Prime Minister Imran Khan for a working visit to Brussels. The foreign minister reiterated the invitation to the High Representative to visit Pakistan.

Foreign Minister Shah Mahmood Qureshi on Friday expressed Pakistan’s unwavering support for the Palestinian cause and underscored the importance of a two-state solution based on pre-1967 borders under the relevant UNSC resolutions for sustainable peace in the region.

In a meeting with Palestinian Foreign Minister Dr. Riyad Al Maliki on the sidelines of Antalya Diplomacy in Turkey, Qureshi strongly condemned the latest Israeli strikes against Gaza after the recent ceasefire.

Both foreign ministers exchanged views on rising Islamophobia and agreed on the need for evolving a joint strategy to counter discrimination against all religious faiths, particularly against Muslims.