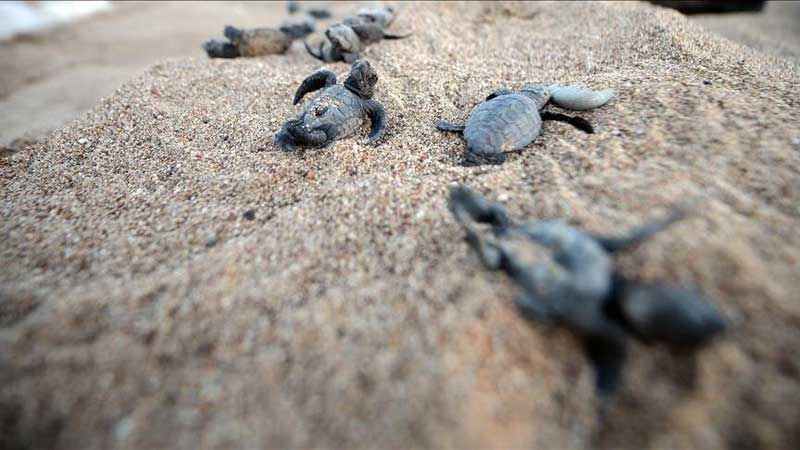 Female turtles lay their eggs on beaches between October and February, and the eggs hatch in about 60 days.

The South Asian country has lost 25%-30% of the nesting ground for green turtles over the past decade, according to Adnan Hamid, a senior wildlife official.

Hawks Bay and Sandspit – the two glistening beaches of Pakistan’s commercial capital Karachi – have long been the preferred nesting sites for rare green turtles due to their sandy nature.

“The two beaches are among the 11 largest nesting sites for green turtles worldwide. However, they have been ruined (in terms of serving as nesting sites) mainly because of uncontrolled construction in recent years,” Hamid, who serves as a deputy conservator in Sindh Wildlife Department, told Anadolu Agency.

Green turtles are also found on beaches in the southwestern Balochistan province.

Increasing water pollution and garbage scattered across the beaches, decreasing natural habitats, and careless fishing are all contributing factors to the dwindling number of the large salt-water species in recent decades, he said.

“Most of the solid waste left behind includes plastic bags and diapers, which are ‘killers’ for the reptiles,” he said. “If consumed, they cause asphyxiation and eventually kill them.” He said sea turtles lay their eggs by digging pits in the sand, but sometimes there is so much plastic that they are not able to dig through the waste, and give up. The official questioned why Pakistan’s sea sites have still not been declared as Marine Protected Areas.

Though wildlife experts agree that increased human activities on beaches pose a potential threat to green turtles, they differ on whether the population of the reptile – the largest of the hard-shelled sea turtles – has increased or decreased.

Naveed Soomro, a Karachi-based official with the International Union of Conservation (IUCN), a global environmental organization, partially agreed with Hamid.

“The number of green turtles has decreased in the recent years, but not to a huge extent, “ he told Anadolu Agency. “I cannot give you the figures, but in my opinion, there is a marginal decline in the population of green turtles.”

On the contrary, Muhammad Moazzam Khan, the technical adviser (marine fisheries) at the Karachi office of the World Wide Fund for Nature (WWF), believes the reptile population is increasing.

“The latest study shows that the population of endangered green turtles is in fact increasing,” Khan told Anadolu Agency, saying there is no evidence to support a general perception of green turtle population decline.

“According to our estimates, there is a 5% increase in the population of green turtles over the past 10 years,” he said.

According to Hamid, most of the fishing trawlers in Pakistan lack “turtle excluder device” or the TED, a specialized device that allows a captured sea turtle to escape when caught in a fisherman’s net. This, he claimed, is another reason for the reptile’s decline. But Khan, the WWF official, contended that some “minor” changes in fishing nets, coupled with fishermen training, have helped increase green turtle numbers.

“In 2014, some 28,000 turtles were caught in fishing nets, whereas by the end of 2017, these numbers were in hundreds only. It was all because of changes in fishing nets,” he argued.

However, the rise in the number of Olive Ridley turtles has been shrouded in mystery.

“There is no record to prove that these turtles have been nesting on Pakistani beaches for over 20 years. But, to our surprise, its population in the open sea (off the Karachi coast) is increasing,” Khan said. “It is often stuck in fishing nets and later released. But the surprising aspect is where it goes (for nesting).”

Beaches at India’s eastern state of Odisha (formerly Orissa) are the world’s largest nesting ground for Olive Ridley turtles. “Do they go to Odisha for nesting? There is no recorded evidence regarding Olive Ridley’s movement from west to east,” he said. “This is the mystery we have been trying to solve.”